"The guns were probably being kept in the hold, buried amidst the rats and oil water."
―Max thought of the weapons location.

With Rats and Oily Water is the third chapter of Part II in Max Payne.

Max enters the bridge and has a brief conversation with Angelo Punchinello over the ship's radio, and then heads down to the hold where he confronts Dime and the rest of his men. After taking down Dime and the rest of the gangsters, Max takes as much of the weaponry from the ship's cache as he can carry and heads up to the top deck to meet a waiting Vladimir Lem. Vladimir thanks Max and tells him he owes Max a favor. Max tells Vladimir that he is going after Punchinello, and putting an end to both of their troubles.

On the PS2/Xbox version, this chapter is divided into three sub-chapters: With Rats and Oily Water, Pissing Punchinello Off and A Dangerous Game.

Complete 'Part II Chapter 3: With Rats And Oily Water' on any difficulty 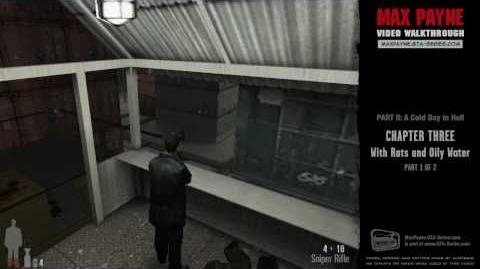 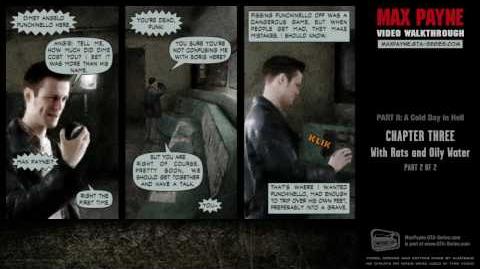 Max Payne - A Cold Day in Hell - With Rats and Oily Water 2 2 (HD)
Part 2
Retrieved from "https://maxpayne.fandom.com/wiki/With_Rats_and_Oily_Water?oldid=26255"
Community content is available under CC-BY-SA unless otherwise noted.