"Have no fear, Vlad is here!"
―Vladimir Lem

Vladimir "Vlad" Lem (Russian: Владимир Лем) was a Russian mobster, arms-dealer, and the leader of the Russian Mob in New York City. He is engaged in a violent war with the Punchinello Crime Family. Fighting the mobsters, Vlad makes an alliance with Max Payne but, a few years later, he gets power hungry and ultimately becomes Max's enemy. He is the main antagonist of Max Payne 2: The Fall of Max Payne.

Not much is known about Vlad's life. It is unknown if he was born in Russia or USA. At some point in his life, Vlad was exposed to the world of drugs and gangs. He became a weapons dealer sometime after.

In New York City, Vlad started his own Russian Mob. The Mob's main enemies were the Punchinello Crime Family.

Vlad restarted a brutal and bloody mob war with Punchinello family. Vlad, however, was not the instigator of this war as according to a letter written by Vinnie Gognitti, the mob had made a hit on his weapons shipments which was believed to have left the Russians too weak to fight back. [1]

A side-conflict in the war was the rivalry between Vlad and Gognitti; the two hated and wanted to kill each other.

Lem was also the protégé of Alfred Woden, the central member of the Inner Circle.

In 2001, Vladimir Lem is first seen driving away from Jack Lupino's bombed out apartment building, after setting a powerful bomb near the place, thus continuing the gang war between the Russian and Italian mobs.

"An Offer You Can't Refuse"

Vladimir returns to help Max out. After hearing about him killing so many mobsters, Vlad arrives back at the hotel to give Max a lift, to propose a truce and to make him "an offer he couldn't refuse:" Sending Max to kill one of his former lieutenants, Boris Dime, who has crossed over to Punchinello's side.

Max complies and, following with Vlad's apparent code of ethics, he allows Max to use some of his heavy weaponry and promises to help whenever he wants.

In 2003, the war has heated up some, but thanks to Max Payne's help, the Russians were able to hit back at the mafia harder than ever, leaving Lem a very successful man, wearing expensive suits and running the old Ragna Rock nightclub, renamed "Vodka". But Lem soon becomes greedy and decides to wipe out the mob completely. Moreover, Lem decides to rid himself of Max by placing a hit on him.

Mona Sax is the one who shot Lem in the arm during one of their run-ins. That is why he is in an arm sling when Max saves him at Vodka.

"Vlad had lied. The cleaning company commandos were his men."
―Max Payne

Lem dates Winterson, Max's partner. She is in love with him, attracted by him due to his attention to her and her blind child. When Vlad captures both Max and Vinnie at Mona's hideout, he shoots Max in the head for the "insults done to his lady;" aka Max killing Winterson. He then blows up Vinnie with his "Trojan Horse" - a giant Captain BaseBallBat-Boy costume with a bomb in it, thus ending the two men's rivalry. Before he shoots Max, he tells him Alfred Woden sent the Valhalla files to the D.A., which, in return, had gotten Michelle Payne killed.

Eventually, Max finds out the many truths about Lem: he is an Inner Circle member, the Cleaning Company commandos are his men, and he is leading the coup d'état against Woden.

When Lem arrives at Woden's Manor, he leads an attack against Woden; Woden's own bodyguards betray him and join Lem. Max and Mona Sax go there as well to stop him and kill Lem. Near Woden's panic room, Mona tries to kill Max on Woden's orders, but realizes that she cannot. That's when Lem shoots Mona in the back. Woden then comes out and tells Lem to stop the killing, and tries to disarm the Russian himself, only to be shot and killed. Max then attacks Lem and disarms him. During the fight with Max, Lem detonates the bomb under them, causing the floor to collapse. Then he makes a run for it, throwing whatever he has left at Max, but Max manages to get through all the guards. In the end, Lem reaches the top part of the manor, a platform from where he throws explosives. Max shoots the weak points of the platform, causing Lem to get close enough to him so that the cop can get a shot at him. As the remains of the platform collapse down together with Lem and his Molotovs, his corpse falls down on the ground floor burning.

"Have no fear, Vlad is here!"
―One of Vladimir's catchphrases

"Dearest of all my friends!"
―One of Vladimir's catchphrases

"You should be glad, Max. I did you a favor, finished off your revenge for you. The murderer of your loved ones is dead."
―When Vlad is attacking Max near the top of Woden's Manor

"Annie was a princess. They killed her for no reason."
―Vlad talking about Annie Finn 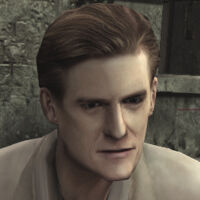 Vlad as a multiplayer avatar for Max Payne 3.
Add a photo to this gallery