Vincent "Vinnie" Gognitti (unknown - 2003) is a major member of the New York City-based Punchinello Crime Family, acting as a capo in 2001, and an underboss in 2003.

Much of his early life is unknown, other than the fact that he is a big fan of The Adventures of Captain BaseBallBat-Boy series. At some point, he joined the Punchinellos, becoming a capo for the family by 2001-2002.

He serves as Jack Lupino's right-hand man, helping him to run out his drug dealing business, as well as serving as an acting-boss, due to Lupino's mental status.

In 2001, He is chased by the NYPD detective Max Payne, who set off a revenge quest, believing Lupino was behind his family's death. Gognitti is seriously injured by the detective and flees from his apartment, letting his men deal with Max, who chases him down on the rooftops.

He is eventually caught by Max and, after being beaten up a bit and threatened with death, he tells the detective about Lupino's whereabouts.

After 2001, he becomes the underboss of the crime family, and begins a gang war against the Russian Mob and its leader, Vladimir Lem, his mortal enemy. Gognitti and his men attack Vodka, Lem's restaurant, vowing to finish off the Russian mobster, but fails due to Max's involvement, leading him to escape the scene.

He is believed by Max Payne to be the main person behind a group of hitmen known as the Squeaky Cleaning Company, but it is revealed to be false, and Lem being the real mastermind. Due to his reckless ways, Vinnie loses his boss's support, leaving him with no men, no weapons, and no protection.

Gognitti finally finds himself at a trap set off by Lem, inside a Captain BaseBallBat-Boy suit wired with a bomb, a 'Trojan Horse' that ironically uses Gognitti's affection to the franchise. Max and Gognitti become briefly allies, being both tricked by the Russian, and Max sets to help Gognitti to deactivate the bomb. The two are caught by Lem at a funhouse, who activates the bomb inside the suit, killing Gognitti.

The same year, detective Max Payne decides to hunt down Lupino, believing that the trafficker was responsible for his family's death. Max's first stop is Lupino's Hotel, but he does not find Lupino, instead, he finds the Finito brothers guarding the hotel, but they are killed by him. Vinnie sends the Finitos a letter telling that hitman and pimp, Rico Muerte, has arrived at the hotel and they are to follow his wishes. Muerte himself is later killed by Max.

A dying pimp of the family later informs Gognitti on the phone that Max has attacked the hotel, leading Gognitti to yell at the (now-deceased) pimp, angrily ordering him to eliminate the detective. Max himself overhears the phone call and set to find Gognitti.

Sometime before the attack, Gognitti sends a letter, saying that the Russian mob has no courage to attack the Punchinellos. This is later revealed to be incorrect, as the Russians destroy Lupino's apartment complex.

After leaving the hotel, Max arrives at Gognitti's apartment, much to the latter's shock, who begins to yell at the detective, only to be shot shortly afterward. Gognitti then orders his men to finish off Max, while he escapes from the apartment.

Gognitti survives his encounter with Max and by 2003, after the deaths of many of the major Punchinello members, Gognitti is promoted to the underboss, while a person known only as the Godfather takes control over the crime family. By 2003, Vinnie becomes much more hostile towards the Russian mob leader, Vladimir Lem, hosting gang wars against him.

Gognitti
Die Russian! Fuckin' die already!
Lem
You're not even trying!
Gognitti and Lem engage in a gunfight at Vodka.
...

In 2003, Gognitti conducts another mob war against Vladimir Lem after getting help from a mysterious third party (hinted to be another Italian mob) in order to wipe out the competition for the gun market.

Gognitti and his men attack Lem's business, a restaurant called "Vodka," and killing most of his men save for Mike. Lucky for Lem, Max arrives and helps the Russian. Gognitti sends his men to kill Max, but they fail. Due to the police's arrival, Gognitti runs away from Vodka, but threatening Lem that he will pay.

Suspect of the cleaner caseEdit

Lem uses Gognitti as a scapegoat, telling Max that the Cleaners were Gognitti's men in order to mislead Max. Within a day, Gognitti starts losing in his struggle with Vlad and is forced to fight on his own turf. For most of Max's case with the Cleaners, Gognitti remains the main suspect.

After his death, his remains were recovered and buried in the Golgotha Cemetery, in which other certain people from Payne's life are buried as well (Nicole Horne and Winterson). On his grave it was written: "His flame burned brightly to the end."

Gognitti is somewhat childish for his age despite his position in the Punchinello Crime Family.

He is fairly clever, but also cowardly; Max comments that Gognitti "...was a high-strung whiner..." who always seemed ready to have a nervous breakdown, and "...had the brains to run the business [the Mafia] but he lacked the balls, always falling short..."

Gognitti is a very hot-tempered and foul-mouthed person, often yelling and cursing when he is angry. Gognitti was known for taking his frustration out on underaged addicts and call girls.

Gognitti is shown to be not very capable with firearms, missing Payne in 2001 while shooting his powerful handgun, and not managing to hit not Lem nor Payne, even when he had a good chance.

Gognitti is a medium-sized man with golden brown hair and hazel-coloured eyes. He has a pale-coloured skin tone.

During his last moments, Gognitti wears a costume of based on the character of Captain BaseballBatBoy; containing a huge head of the character, which has an open mouth from where Vinnie can see. It contains a white T-shirt and gloves, as well as blue pants and ridiculously big red All-Stars shoes.

Role as an Antagonist Edit

When fighting Gognitti in Max Payne, he wields a Desert Eagle and has poor aim. He has the most guards guarding him which makes him hard to reach. With around nine guards he can be tricky to reach. Kill the nine guards atop the staircase. It is possible that they will come up and fight you. Once his guards are taken care of, Gognitti can be easily taken down with just three shotgun shots. If the player fights Gognitti in Hardboiled difficulty the best strategy to fight him is using Ingram Or Beretta. 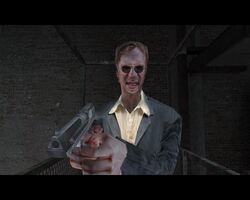 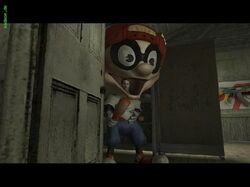 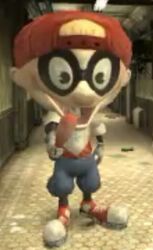 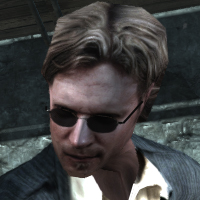