Start a Wiki
With the release of Max Payne 3 tomorrow, the critics have voiced their opinions, and the consensus is overwhelmingly positive! 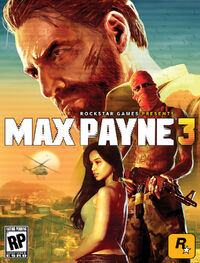 Here are a few snippets from publications on both the Internet and print. Make sure to voice your opinions on the matter below!

Score: 5/5
"Max Payne 3 is a technological tour de force that will have you screaming "Dear lord!" more times than midnight mass. The performances are top notch, the action plays out with unrivaled fluidity, and the multiplayer is deep and rewarding. Silly distractions aside, Max Payne 3 is an action lover’s wet dream that also happens to employ some of the slickest direction and transitional trickery this side of a David Fincher box set. Lock and load. It’s bullet time...time."

Score: 9.25/10
"No matter what gameplay mode I chose, I had a great time playing Max Payne 3. The gameplay doesn’t explore new territory, but delivers a retro charm that fans of the series should appreciate. It’s a new day for Max Payne, and at the same time, a return to his glorious past."

Score: 9/10
"Max Payne 3 is therefore yet another demonstration of the ability of Rockstar to have the resources and talent needed to achieve their ambitious aims. Only due to this force can take over a license as delicate as that of Max Payne and able to regenerate, while imposing its vision of video games. All this without affecting the quality of experience at all, you can count on a campaign of intense and spectacular, as well as a fun and complete multiplayer component."

Score: 4.5/5
"At least the plot is light on embarrassment, never coming close to the amateurish lows (or over-the-top highs?) that invoke utter dread whenever a significant other enters the room. No, it's a functional component of Max Payne 3, a game built out of remarkably implemented, masterfully presented parts. Video games live or die by the mechanisms that lie underneath. That's why the graveyards are always full."

Score: 9/10
"There are plenty of games which are celebrated for their gameplay but lack anything in way of story or character. Max Payne 3 is a different type of proposition. The gameplay is simple yet satisfying, but it’s entirely in the service of a strongly-authored narrative. Players aren’t at the liberty to roam, to explore, or to shake things up. Some might find this too controlling, but in return for your freedom, you’re rewarded with a mature genre piece which is also a finely-realised character study."

Score: A-
"The fact that I happily pressed on through some of the game's frustrations is a testament to just how enthralled I was by the rest of MP3. I would gladly endure the occasional bout of annoyance to experience more of Rockstar's impeccable presentation and superb storytelling. Likewise, the high-bar set by the multiplayer makes it easy to forget any of the dissatisfaction that stemmed from shooting gallery bits of the main campaign. And although the gunplay may still have its roots planted firmly in the past, the way Max Payne 3 showcases its world is undeniably forward thinking. It's a bit strange to gain so much pleasure from Max's suffering, but I guess that's the true essence behind Rockstar's magic."

Score: 8/10
"Like its hero, Max Payne 3 has its flaws. The repetitive action might be reminiscent of the original games, but it's still repetition, and ultimately that causes things to drag. Fortunately just like Max himself it's also difficult to dislike - the plot isn't something you'll be able to leave alone for long, bullet time still has the capacity to thrill and the multiplayer provides the variety and unpredictability required for genuine longevity. This new spin on familiar action is proof, if proof were needed, that there's life in the old dog yet."

Score: 4/5
"Rockstar has taken a lot of risks in the ways it has reshaped the series with Max Payne 3, and there’s something to be said for opting out of the easy route. The aesthetic overhaul is certainly the most noticeable, though there's no understating the impact that certain gameplay modernizations have had on the experience. While fans might have a hard time processing the dramatic change in tone, it’s approached with a seriousness and conviction that I respect, and frankly, have come to expect from Rockstar."

Score: 7/10
"Max Payne 3 might solve the problem of how you manage to reload when carrying more than one gun, but detailing alone can’t change the fact that this is a surprisingly conservative game from Rockstar. Its absorption of cover mechanics makes Payne feel more familiar than he should, but even then his signature tricks are over a decade old. This is a game about a world-weary killer doing the only thing he knows how to, and for all its spectacular action beats there’s something apt about Max’s fatigue."

So far, no reviewers have hated Max Payne 3.

Now it's your turn to be a critic. Let your voice be heard! Leave a comment below for why you picked your choice!

Retrieved from "https://maxpayne.fandom.com/wiki/User_blog:Soldierscuzzy/Max_Payne_3_Review_Roundup?oldid=10754"
Community content is available under CC-BY-SA unless otherwise noted.