Outside of Roscoe Street Station
The Tutorial for Max Payne is designed to help players learn the basics of the game.

The tutorial is presented as a scenario where, during a cold, snowy night, Max Payne has to make his way through alleyways and along Roscoe Street in the Bronx, all while taking out mobsters using weapons he finds scattered around the area. The tutorial seems to be a tie-in to the first

chapter of the first part of the game, while using elements of Roscoe Street and its alleys from the end of the second chapter, Live from the Crime Scene. When the tutorial begins Max is in a small alleyway, surrounded by the neighborhood's buildings and armed with only a lead pipe and Beretta, but as he works his way further through the environment, Max will eventually find more weapons to use.

Throughout the tutorial, following the game tips presented, the player will learn how to move, use world objects, search containers for items, use weapons, shootdodge, go into Bullet time, jump, do an evasive roll, quick save, fight enemies, use painkillers, and explore the environment. The final task in the tutorial covers the sniper rifle, instructing the player on how to use the rifle's scope to target enemies. Once the back doors of the ambulance on Roscoe Street are opened to claim the rifle, three assailants are spawned in the nearby alley; for a strategic position to take out the mobsters, the nearby fire escape can be used to provide a higher-ground firing position.

Learning to use weapons in a fight requires pushing the "enemy dispenser" button, which spawns three mobsters around the area. After the sniping portion of the tutorial, the button once again becomes functional, spawning five enemies with each push. Defeating a wave will make the button work again, this way gunmen can be spawned indefinitely.

Locate the Secret Room during the Tutorial

Although it seems as though the tutorial ends with Max Payne reaching the Roscoe Street Station, implying that the conclusion of the tutorial leads into the first chapter, both the scenario and environment of the tutorial are non-canon due to the following reasons:

There is a secret apartment where painkillers and an Ingram with ammunition can be found. The residence can be accessed by first jumping on top of the ambulance that contains the sniper rifle, then by leaping on top of a nearby air conditioning unit, and then finally jumping onto the closest fire escape. Climb the fire escape to the top and shatter the window on the left to access the apartment.

The fire escape that leads to the secret apartment 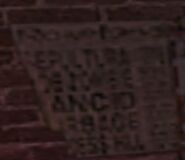 Tar Cafe marquee with the "all your base..." reference

The beginning of the tutorial
Add a photo to this gallery

Retrieved from "https://maxpayne.fandom.com/wiki/Tutorial?oldid=26334"
Community content is available under CC-BY-SA unless otherwise noted.