Too Stubborn to Die

Prologue (Waking Up from the American Dream)

On a Crash Course

"Bravura was too stubborn to die. I had to buy him time, draw the commandos after me, get out of the hospital."
―Max's plan after seeing Bravura getting surgery.

Too Stubborn to Die is the first chapter of Part III in Max Payne 2.

The chapter opens by picking up where the first prologue left off with Max in the morgue, overlooking Valerie Winterson's body after being chased by Cleaner commandos through the hospital. While Max stands over Winterson's body, he takes a few painkillers and comes across a card for Vladimir Lem's restaurant, Vodka; he is then spotted once again by Mitchum, a Cleaner commando. Determined to follow the Vodka card clue and get past the Cleaners to find Vlad, Max pushes past Mitchum as he runs out of the room and up the nearby stairs.

Chasing Payne through the facility and shooting hospital staff on sight, the Cleaners corner him in a room made up of several cubicles. While hiding from Mitchum and his partner, Feller, a security guard comes into the room in order to stop the armed assassins but he is killed. Max seizes the opportunity and recovers the guard's weapon and swiftly guns down both Cleaners, then continues on through the hospital. In a room down the hall Max sees a security feed of Jim Bravura on the operation table, and he feels determined to lead the commandos out of the hospital and away from Bravura. Taking down Cleaners and moving through the corridors, Max passes the reception desks and hears a few nearby Cleaner commandos talking about how Feller and Mitchum are taking too long and that it is time to bring out the "heavy artillery."

Max takes down several more Cleaners on the floor and proceeds down a staircase while taking down another group of commandos. Reaching the parking garage Max encounters the remaining Cleaners and one security guard, and though the security guard goes down fairly quickly, Payne is able to kill the remaining Cleaners. Realizing that he must solve the case on his own, Max heads to Alfred Woden's manor for answers. When he arrives, they discuss Max being targeted by the Inner Circle, and Woden explains that he's dying and a rebellion has occurred from within the the secret society, killing everyone who resists them. Max names his suspect behind the rebellion, Vinnie Gognitti, but Woden reveals the real leader behind it all: Vladimir Lem. Woden tells Payne that Lem is going after Gognitti and once he's dead, Vlad will come for his former mentor: Woden himself. 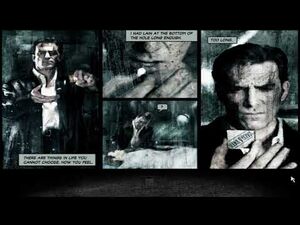 Retrieved from "https://maxpayne.fandom.com/wiki/Too_Stubborn_to_Die?oldid=29754"
Community content is available under CC-BY-SA unless otherwise noted.