"I didn't deserve to walk away. There are no happy endings."
―Max Payne

There Are No Happy Endings is the sixth chapter of Part III in Max Payne 2.

Max is being held at gunpoint by Vladimir Lem in Mona Sax's apartment, while Vinnie Gognitti is stuck downstairs due to his suit not being able to fit through the door to Sax's apartment. Vlad discusses his similarities to Mona, as she is working to kill him and the Inner Circle members allied with him, while Lem is killing off the members loyal to Woden. Vladimir then confirms that he was romantically involved with Valerie Winterson, and because Max was the one who shot her, Lem shoots his former ally in the head as revenge.

The detective plunges once again into a nightmarish landscape, appearing in an abandoned apartment building and sees Jim Bravura standing over the semi-covered corpse of Max Payne. The scenery transitions to the police precinct that Bravura and Payne work at, revealing Bravura on an operating table in the middle of the room.He tells Max that the suspect is in the interrogation room and dies shortly after. Max then heads into the interrogation room and sees a reflection of himself, who begins to open fire but soon after the mirror double runs out of the room. Max also leaves the room but finds himself in his apartment building, where he sees Ed the janitor as well as Max's doppelgänger, who opens fire on Max once again before running away.

Max explores the hallways and finds televisions that show scenes of Vinnie Gognitti and Mona; the first scene reveals Gognitti in his Captain BaseBallBat-Boy costume that is rigged with explosives, and after failing a trivia game that he plays with Vlad, the Russian Mob boss detonates the explosives, blowing Vinnie and his costume up. The second scene shows Vladimir attempting to convince Mona Sax to join him, but Mona instead shoots him in the arm (which could explain Vlad's arm sling that he is seen wearing throughout the story). Payne moves on but is eventually stopped by Mona, who tells him to wake up and when she kisses him, he does.

The funhouse is collapsing in flames when Max regains consciousness, and he quickly tells Mona that Vlad is on his way to Alfred Woden's manor. Sax tells Payne that he isn't in any shape to go anywhere and that he doesn't need to concern himself with Vlad and the rebellion anymore, because according to her, it isn't his fight. Max doesn't trust her until he sees the whole affair to the end, so he tells Mona that he doesn't care and she needs to come with him. 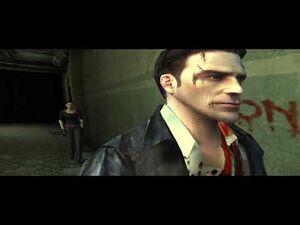