The Things That I Want

The Things That I Want

"'The Things That I Want' by Max Payne. A smoke. A whiskey. For the sun to shine. I want to sleep, to forget. To change the past. My wife and baby girl back. Unlimited ammo and a license to kill. Right then, more than anything, I wanted her."
―Max Payne

The Things That I Want is the first chapter of Part II in Max Payne 2.

After a short car ride with Vladimir Lem, Max arrives at the funhouse, and sees Mona coming out of the nearby darkness. They head inside and become intimate, but they are interrupted by the Cleaners who seems to have followed Max to the run-down building. They make a run for the upstairs apartment, but the scaffolding breaks down beneath Max as they run, leaving Mona no choice but to leave Max behind and continue on to the apartment.

Max, working his way through the maze of backdrops and Cleaners, eventually makes it about half-way back through the attraction when Mona joins in and takes out a few Cleaners with her Dragunov. Max uses the opportunity to kill the rest of the Cleaners in the room, and continues through the funhouse until Mona opens a door leading backstage. Max heads through the door to the backdrop area again and takes out several more Cleaners.

A lone gunman bursts through a nearby door but Max is able to take him down, then Max goes out the door the assassin just came through to see two Squeaky Cleaning Company vans leaving. Noticing the second van's open back doors and no time to think, Max jumps into the back of the van as it speeds off. Riding along to an unknown destination, Payne realizes that he still has the radio that he and Mona previously used and, using the headset, he tells Mona that he's alright and that they can meet at his location when the van's driver reaches his destination.

Interesting interactions with the funhouse and the Cleaners can be witnessed throughout the chapter: 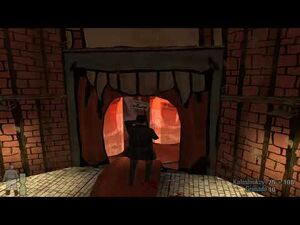