A Fat Bald Dude with a Bad Temper

"Well done with your effort. The whole city is grateful, the great American savior of the poor."
―Alvaro Neves to Max Payne

The Great American Savior of the Poor Is the twelfth chapter in Max Payne 3.

Wilson Da Silva tells Max that there's an old Hotel, where nobody ever leaves, which contains members of the Crachá Preto. Max agrees to help and enters the building from the basement. He spots two Crachá Preto members dumping body bags into the fire. They quickly throw the last bag and leave the room via elevator. Max follows them via the same elevator and sees them both near some surgical equipment. Max shoots them both and continues to proceed.

Later on, Max finds a group of Comando Sombra that have been captured and had some of their organs taken away from them. In that group he sees Serrano, who can barely walk and has lost his eye. Max lets everyone go and continues on his mission. Some time later in the chapter, Max enters a room that used to be the kitchen for the hotel restaurant, now used as a laboratory and sees Arthur Fischer, a surgeon for the Brancos who has been harvesting organs for the Crachá Preto, frantically trying to collect his money. Max shouts at him asking what he has been doing, while Dr. Fischer offers Max lots of money just to let him go. A few seconds later, Serrano enters the room, shouting at Dr. Fischer, then Serrano takes a scalpel off one of the tables and stabs the doctor. This was Serrano's revenge.

Max then continues and later in the chapter, he finds a small room filled with ammunition and exposed columns outside the room. He takes some C4 explosives and plants them on the pillars, while he is planting the C4, some of Crachá Preto attack Max who fights his way through, thus planting C4 on other columns. After the C4 is planted, Max goes on the roof and shouts at some Crachá Preto members, while holding a detonator high up in his hand, so they can see and not shoot Max. Later, Álvaro Neves comes out of his chopper and sees Max with a detonator. They have a conversation about what the Crachá Preto is doing and later Max gets annoyed and pushes the button, thus destroying the building.

While the building is collapsing, Max fights his way through some Crachá Preto members with some rooftop tremors messing up his aim. Later, as Max is knocked down by a tremor, Neves comes and points his gun at Max while he is down. When he is about to pull the trigger, he gets killed by Max's friend Raul Passos. They both have a short argumentative conversation and then leave with a chopper as the building collapses. 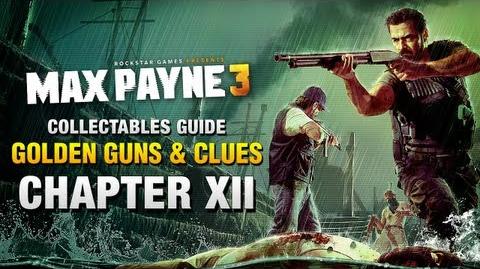 Serrano is about to kill the doctor that brutalized him

Sometimes You Get Lucky

Get A Headshot During The Rooftop Tremors