"Something in the night felt like a door had been opened, an echo of the past, an old monster snapping its eyes open in the depths of my brain."
―Max monologue his nightmares

The Depths of My Brain is the third chapter of Part I in Max Payne 2.

Max comes home to recover from the chaotic events that took place earlier in the evening and takes a restless nap, plunging into a bad nightmare. He wakes up in a dream-like version of his apartment, with Address Unknown playing in the background. As the show's plot unfolds it echoes what Max is experiencing, such as the picture of Mona Sax being slipped under the door. He opens the door to find no one there, and starts to run through the hallways and stairwells of his apartment building. Payne goes through a door and finds himself in a hospital morgue, and Mona appears as a dead body in a storage area for the deceased, then suddenly appears alive on the table and instructs Max to answer the ringing phone in the corner.

Answering the phone Max hears the same conversation of Vlad reassuring his girlfriend of his safety during the shoot-out at Vodka earlier in the evening. Max begins hearing Valerie Winterson and Jim Bravura's voices, and is then in an alley being held at gunpoint by Bravura and several New York City Police Department officers. The detective suddenly-turned fugitive runs away from the police and into the darkness of the night, as the police aim and fire at him.

The landscape shifts and Max is in an interrogation room at the police station he work at, being questioned by Winterson and threatened by Bravura in regards to what Max knows about Mona. Max stands up and grabs his gun from the nearby table and shoots both Winterson and Bravura, and as their bodies fall to the ground, Max wakes up on his sofa in his apartment. Payne, attempting to awaken and still in a groggy and half-awake state, hears someone knocking on his front door in the same manner as in his dream; he grabs his gun and answers the door, and the chapter ends. 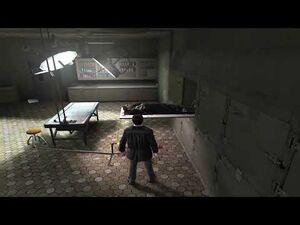 Retrieved from "https://maxpayne.fandom.com/wiki/The_Depths_of_My_Brain?oldid=29741"
Community content is available under CC-BY-SA unless otherwise noted.