"It wasn't hard to picture a fat pimp sweating with headphones on, listening to his hookers talk dirty and fake orgasms over the web of party lines; the blood veins of New York."
―Max Payne describing the hotel's telephone switchboard.

The Blood Veins of New York is the fourth chapter of Part I in Max Payne.

Max reach the basement of the hotel and proceed to kill any gangsters in his way. Meanwhile, he saw a weather news about the snow storm outside and saw a corpse tied to a chair with a baseball bat and a newspaper comic of Captain BaseballBatBoy. He soon headed to ground floor and reach to the room where a Valkyr deal is made.

Max took the key to the bar and unlocked the door to see both Rico and Candy having oral sex. Max interrupted and have a gun battle between Max and the Punchinellos. After that, he reach the counter and behind it was a switchboard where it is used to listen prostitutes talk by the pimp. Max listen in and heard a conversation between Vinnie and a dying mobster.

Since the gate to the exit is closed, Max proceed to upstairs and kill mobsters in the casino. Max arrived at the roof and headed down to the lobby to be greeted by more mobsters. After killing them, he went back to the counter to unlock the main door and exited th hotel with the next destination, Lupino's Tenements.

On the PS2/Xbox version, this chapter is divided into three sub-chapters: Caught in the Crossfire, Rico Muerte Big Time Hustler and The Blood Veins of New York.

Complete 'Part I Chapter 4: The Blood Veins Of New York' on any difficulty 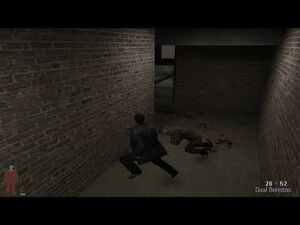 Retrieved from "https://maxpayne.fandom.com/wiki/The_Blood_Veins_of_New_York?oldid=29688"
Community content is available under CC-BY-SA unless otherwise noted.