For the weapon in Max Payne, see Baseball Bat.

Prologue (A Cold Day in Hell)

"He had a baseball bat, and I was tied to a chair. Pissing him off was the smart thing to do."
―Max Payne

The Baseball Bat is the first chapter of Part II in Max Payne.

Max Payne wakes up tied to a chair in the basement of Jack Lupino's hotel, with Frankie "The Bat" Niagara standing over him. After Max insults him a bit, he takes a beating with a baseball bat.

Once Niagara goes to get a drink at the bar, Max breaks free and kills the guards in the basement. He then takes an elevator up to the garage where he makes it out to the street.

Max decides to head back into the hotel through the front door and finds it's all been closed off by the police after Max's last visit. Max heads to the bar where he finds Niagara and kills him and many of his men. After the shootout, Max helps himself to a car, (mostly likely Niagara's) and soon after leaving the hotel, he notices he's being followed by a familiar-looking car. Confronting the owner of the car, Vladimir Lem, Max learns that Vlad wants to make a deal with him, leading into the next chapter: An Offer You Can't Refuse.

On the PS2/Xbox version, this chapter is divided into three sub-chapters: The Baseball Bat, From Bad to Worse and Mobster Muscle.

Complete 'Part II Chapter 1: The Baseball Bat' on any difficulty 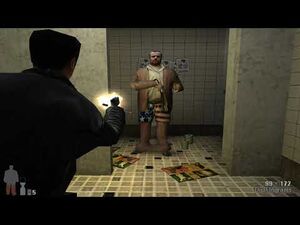 Retrieved from "https://maxpayne.fandom.com/wiki/The_Baseball_Bat?oldid=29695"
Community content is available under CC-BY-SA unless otherwise noted.