"I felt the rise of that old familiar feeling. I hated it. I welcomed it."
―Max Payne

Alfred Woden attempts to talk Vladimir Lem down from killing anyone else, and after Vlad expresses that he has no desire to stop Woden suddenly lunges from his wheelchair and tries to strangle Vlad, but is shot during the struggle. Max quickly charges Vlad as well, and as Max pins Vlad while knocking the gun out of his hand, Vlad uses a detonator in his other hand to set off explosives beneath them. Both men fall down into the cellars below; Vlad quickly recovers and flees, while Max finds Lem's gun underneath himself.

Now armed, the detective chases after Vladimir, but soon after entering another portion of the basement, another bomb goes off, this time dropping the vault-like panic room behind Max. Killing a few more of Woden's traitorous bodyguards, barrels of explosives are about to detonate as Max uses the panic room as protection against the explosions. After the worst of the explosions are over, Max leaves the room and continues his pursuit of Vlad, continuing through the underbelly of the manor while taking down more commandos and bodyguards.

Payne eventually gets out of the basement and finds Vlad and a few bodyguards standing on the other side of a security door, where the Russian Mob boss taunts Max. Vlad and two of his bodyguards then leave before the security door opens. Following the trio, Max comes across Woden's main office, where he finds a large cache of weapons and painkillers, as well as a phone with several messages. Max first hears a recording of himself from earlier, then a recording of Mona telling Woden that she can't go through with killing Max. The last message is from Vlad, saying that he is coming to kill the Senator, on the basis of Woden's supposed lack of approval or attempt to have a closer father-son relationship with him.

Before leaving, a NYNN report is on the office's television, with Kyra Silver covering the rise of organized crime violence and its connection to the 2001 Valkyr scandel, while also reporting that Jim Bravura is in stable condition after being shot earlier that night. Max then uses the office's elevator, riding it up to Woden's private quarters; from there, Max makes his way to the highest point within the manor, where a great structure is being supported by several bolts, cables, and a support platform. Vlad is on the platform, shooting and throwing molotov cocktails at Max, who is able to avoid the worst of Lem's firepower and bring down the platform.

Vladimir remains practically uninjured by the fall, but Max continues to take out all of the supports for the manor's roof structure and eventually, after Max then shoots Vlad in the chest several times, the entire roof collapses under the weight. Vlad and the structure both fall into the dining hall below, bringing the Inner Circle civil war and the Cleaner case to a close. While Vladimir Lem's body burns in the rubble, Max stumbles back to where Mona is, and as he holds her she laments over being nothing more than "damsel in distress." Mona dies, and after some time the NYPD arrive and begin to look for survivors, discovering that Max is the only person still alive. The game concludes with Max apparently coming to terms with his past, including the death of his wife: "I had a dream of my wife. She was dead, but it was all right."

On the PS2/Xbox version, this chapter is divided up into two parts: Chapter Eight: That Old Familiar Feeling and Chapter Eight Continued...

After Vlad throws Molotov, the fire spreads behind the door. If they're opened, they show the opened shelf with ammunition among the fire. 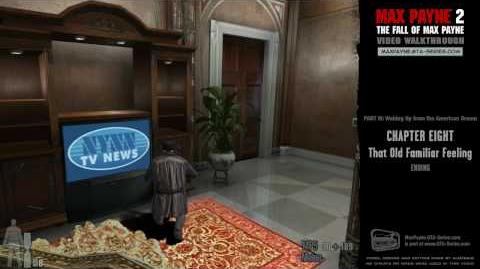 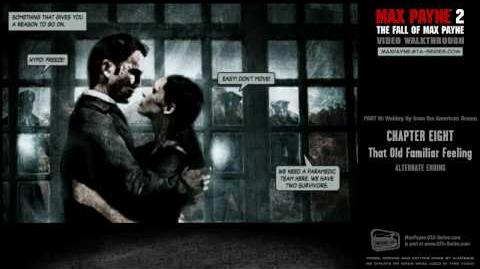 Retrieved from "https://maxpayne.fandom.com/wiki/That_Old_Familiar_Feeling?oldid=26639"
Community content is available under CC-BY-SA unless otherwise noted.