Max Payne 2
Striker is a weapon featured in Max Payne 2: The Fall of Max Payne. The Striker is a fully automatic drum-fed shotgun. It is powerful, capable of eliminating large goups of enemies.

The striker fires out huge blasts, lots of shells, wide spray range. It has automatic fire. This gun can take out huge groups of enemies very quickly. The striker is easily the best shotgun in the game, combining the spread of the sawed-off with the consistency of the pump-action but with a greatly increased fire rate and damage. As with all shotguns, be sure you are close enough to use it properly; also, beware of enemies who wield this weapon, although thankfully they are an extreme rarity. The gun is non-existent until Part III; from that point on it is best used in small, confined areas.

The striker is the only shotgun to have a separate ammunition slot.; it holds striker ammo is fairly plentiful in caches in Part III when compared to other guns; however, it is almost never used by enemies, so ammo may become scarce.

The striker can be viewed as the Max Payne 2 counterpart of Max Payne's Jackhammer; both are fully automatic, workhouse shotguns that are acquired late in the game. 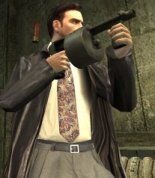 Retrieved from "https://maxpayne.fandom.com/wiki/Striker?oldid=26410"
Community content is available under CC-BY-SA unless otherwise noted.