In 2012, Serrano targeted the Branco family, attempting to kidnap Rodrigo Branco and his wife, Fabiana. Serrano failed to capture Rodrigo, but his men managed to capture Fabiana. The Brancos tried to make a ransom deal, but it failed due the Crachá Preto destroy the exchange.

A few days after being captured, Serrano was later saved by Max Payne, and finally confronted the one who cut open his friends, Arthur Fischer, killing him. His ultimate fate following this event is unknown, and his current whereabouts are unknown.

"Known as "Serrano". Believed to be a reference to the Serra da Mantiqueira, where he spent his early childhood."
―A part of the UFE file.

Not much is known about Serrano's early life, and his real name was never revealed. His nickname is derived from the town he spent most of his childnood in, Serra da Mantiqueira.

His parents were African immigrants who died when he was 8 or 9 years old. By the age of 11, he lived on the streets of Sao Paulo, and by the age of 12, he already commited his first murder.

After Max confronts a doctor, Arthur Fischer, who is responsible for the actual harvesting of organs, Serrano enters the room, and begins to yell at the doctor for what he done. Serrano takes a small scalpel, and kills the doctor. Max then leaves the scene, and states that for all of what Serrano did him, he paid enough.

Following the events in the hotel, Serrano's fate was left unknown. Max later finds UFE files in an UFE computer. Max finds that the UFE has no information about Serrano's current status. Max then states that part of him hopes that Serrano is alive. Max also finds out that the Comando Sombra are fully defeated, losing all of their turfs.

Despite his actions, it seems that Serrano has a great care for his fellow gang members, and possibly for other poor Brazilian citizens, as he becomes angry after he sees the remains of several CS members in Arthur Fischer's morgue. 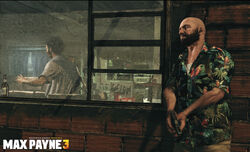 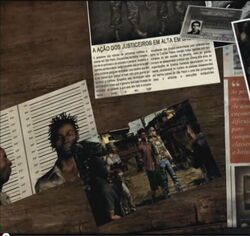 Serrano's hideout.
Add a photo to this gallery

Retrieved from "https://maxpayne.fandom.com/wiki/Serrano?oldid=14907"
Community content is available under CC-BY-SA unless otherwise noted.