For the achievement in Max Payne 3, see So Much For Being Subtle (Achievement).

"Next stop: Roscoe Street Station, and Alex"
―Max Payne before stepping off the train

Roscoe Street Station is the first chapter of Part I in Max Payne.

Max became an undercover cop in the Punchinello Crime Family for 2 months to investigate the Valkyr involvement with the Mafia. Only BB and his partner, Alex Balder knew his identity as an undercover cop. One day, BB contact Max that Alex need to meet up at Roscoe Street Station during an snowy storm night. Max came to the train station, realizing he had a bad feeling about the meeting.

He arrived to find that the gate to the main station is locked which made Max more suspicious. He found a shotgun shell near the personnel locker room with bullet marks and blood drags to eventually finding the corpse of a transit cop. The discovery made Max to draw his Beretta and have to find Alex in the amidst of possible killers. He loot the lockers room before leaving to find 2 mobsters at the train station, waiting to kill anyone stepping out the upcoming train. Max proceed to kill the 2 mobsters and headed to the unlocked gate to find Alex.

He kill 4 more gangsters on the way to find a locked door to the security room and a passage to an abandoned section of the train station. Since the security room is locked, he head down to the abandoned train station and kill more mobsters. He eavesdrop the mobsters to realize that a heist is going on. Unfortunately, the gate to the abandoned station is locked and have to go through the rail lines but it is also barricaded.

On the PS2/Xbox version, this chapter is divided into two sub-chapters: Roscoe Street Station and So Much for Being Subtle.

Complete 'Part I Chapter 1: Roscoe Street Station on any difficulty 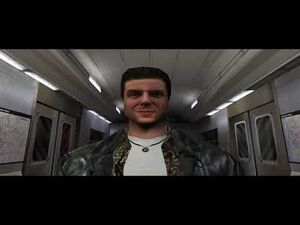 Retrieved from "https://maxpayne.fandom.com/wiki/Roscoe_Street_Station_(Chapter)?oldid=29685"
Community content is available under CC-BY-SA unless otherwise noted.