"Max, we work private security. We're all ex-soldiers, ex-special forces, ex-cops, ex-good guys. We all have our reasons why we became ex. Maybe now we can put things right, okay?"
―Raul Passos to Max Payne

Raul Passos is an NYPD detective turned bodyguard based in São Paulo, Brazil. Passos recruits Max Payne to work as a bodyguard for the Branco Family in São Paulo.

Passos was born on April 27th 1973, in Colombia, though he claims that he is from Brazil. At some point, he lived in New York and became a police officer, but quit later on and eventually found work as a bodyguard for the Branco Family.

Passos was paid by Victor Branco, the brother of Passos' boss Rodrigo, to find and hire Max Payne, as a part of Victor's plan.

Sometime later, Passos travels to New Jersey and recruits Max Payne to work as a private security sector for Rodrigo Branco and his family in São Paulo. Passos enters to Walton's Bar, where he sees the mob boss' son Tony DeMarco and his thugs threaten Max. Passos draws a .38 Revolver and tells the thugs to leave the bar. Tony, however, promises that he'll return. At the bar, Passos tries to pick up Max for the job, but the ex-detective refuses. After telling Max a part of his time at the NYPD, the two begin to drink along with another woman. A while later, Tony returns and threaten Passos and Max. Tony begins to argue with the woman, and hits her, but is shot dead by Max. He and Passos then fight the large army of mobsters, managing to escape to Max Payne's apartment building. At the building, the two are soon attacked by Anthony DeMarco and his mafia, but managing to escape once again, to the Golgotha Cemetery.

At the cemetery, DeMarco's goons attack the two, who are captured by DeMarco. Passos taunts the angry mob boss, who hits him with a shovel, and tells them to dig their own graves. Max is able to defeat the thugs, and Passos escapes with him. After escaping the cemetery, Passos and Max begin to work for the Branco family.

A few weeks later, Passos and Max begin to work for the Branco family, starting their work in Aruba. The second job Passos has had with Payne was in Panama. During a short vacation in Panama on a boat, along with Max and Marcelo, Passos gets another order from Victor; to deliver a bag full of unknown material. During the delivery, the boat is attacked by a group of 'pirates', called the AUP. After Max escapes from the boat, Passos helps him to kill the remaining pirates, finding all the other passengers dead, much to Passos' shock.

Soon, the Comando Sombra attempts to kidnap Fabiana at a charity event. However, Max arrives in time to save both her and her husband. Days later however, the Comando Sombra shows up again, only this time at the Club Moderno, and this time they came prepared. Passos and Max save Giovanna, but Fabiana is kidnapped.

Passos and Max then set to rescue her and during this time, Passos provides Max weapons and information. At one point, he helps Max during a massive gunfight in a soccer stadium.

When Max saves Giovanna from Comando Sombra for the second time, he finds out that she is pregnant with Passos' child. Learning this, Passos becomes worried for Giovanna, at one point leaving Max behind to get her somewhere safe, much to Max's annoyance. After Max destroys Crachá Preto, Passos kills Neves just before the latter was about to kill Max. Passos and Max have a short argument on the events that transpired recently, but the two leave shortly after on a helicopter. In their last encounter, Max peacefully parts ways with Passos and Giovanna before the couple leave São Paulo to raise their child.

"As I said.. Passos always has a good sense of humor"
―Max Payne

Passos shares Max's dry wit (albeit with more profanity) in most situations, and is very sarcastic. He's something of a comedian, most prominent when he first meets Max at Walton's Bar. He's also quite deceptive, openly lying to Max about knowing him from the academy to convince Max to work for the Branco family. However, he genuinely cares for Max's well being, shown when he patches Max up after the latter was shot by a sniper and when he kills Alvaro Neves to save Max. 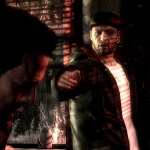 Raul recuits Max for a job.

Raul and Max walk into a building.