For the nightclub, see RagnaRock.

Ragna Rock is the eighth chapter of Part I in Max Payne.

After getting information from Vinnie Gognitti, Max Payne arrives at the Ragna Rock nightclub in search of Jack Lupino. Max quickly runs into trouble and has to shoot his way past mobsters; he also finds many books alluding to Lupino's obsession with the occult.

Payne makes his way through the nightclub, starting at the front entrance, then working his way up to the balcony area of the club, where he finds a way to the roof of the nightclub. Traversing the rooftop, Max comes across a way to get back inside, specifically the backstage area of the club. Backstage, Max continues to take out numerous mobsters and Lupino's bodyguards, and eventually he reaches a door that leads to Lupino's ritual chambers.

On the PS2 version, this chapter is divided into three sub-chapters: A Den of Drugs, Ragna Rock and An Empire of Evil.

Complete 'Part I Chapter 8: Ragna Rock' on any difficulty

Max in the Ragna Rock nightclub 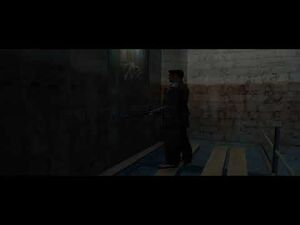