The Punchinello crime family, also commonly known as The Mafia or The Mob, is an Italian-American criminal organization set in New York City in 2001. It is one of the principal adversaries of Max Payne.

After suffering heavy losses in 2001, including losing its Don and underboss, Mafia's remnants still exist and operate in 2003. However, that year, they are further heavily crippled by Max Payne and Vladimir Lem's forces.

In 2001, the Mafia are the involved in distributing valkyr and appear to be having trouble with the Russian Mob.

After Max Payne's wife and daughter are murdered, the widower goes undercover, working for Jack Lupino, the crime family's underboss.

The faction is first seen in Roscoe Street Station, when a group of mobsters or their petty associates try to rob the Roscoe Bank by blasting through the subway, but, unfortunately for them, Max is there and he kills them all, while looking for his friend.

That same night, at Lupino's Hotel, the Finito Brothers discover Max is a cop and Max is forced to kill them and Rico Muerte to escape.

Later, Max arrives at an apartment complex occupied by the Mafia, just as the Russian Mob have planted bombs all over the place. Max eventually runs into Vinnie Gognitti and chases him down, until he corners him in a back alley and has him give away Lupino's location.

Max then heads to Ragna Rock where he kills Lupino and his bodyguards, before he is drugged and wakes up tied to a chair by Frankie "The Bat" Niagara who is beating him with a bat. Max then escapes and kills more mobsters and eventually Frankie himself.

Later, the mob set a trap for Max by burning down Don Angelo Punchinello's restaurant with Max still inside, but Payne survives and soon storms Angelo's mansion, killing The Trio. The Don himself is executed by Nicole Horne's Killer Suits.

A few years later, Vinnie Gognitti, who has been given a higher position in the family, is involved in a full scale war with the Russians. According to Vladimir Lem, it was Vinnie who started the war. The Mafia has been reduced to a much weaker force since 2001.

They are first seen when they attack Vodka in an attempt to kill Lem, but are defeated.

At the NYC police station, a mobster is seen talking with an officer about having been injected with valkyr and framed for killing his wife and a pizza delivery guy. Most likely though, his wife had an affair with the delivery man and the mobster killed them both.

More mobsters appear when they defend Vinnie's used car lot and the nearby neighborhood from Cleaner Commandos. Some mobsters mistake Max for the backup they were supposed to get and Max fights alongside them until another mobster informs them who Max is and they turn on him, but get killed. A message can be heard on Vinnie's answering machine from the unnamed current Don of the family, saying that Vinnie went against his wishes to not go to war with the russian, blaming him for starting the war and refusing to provide Gognitti any further assistance in his feud with Vladimir. Vinnie is then on his own, with the last few remaining men of his crew.

With all of his men dead, Vinnie gets trapped inside the Captain BaseballBatBoy suit wired to a bomb and teams up with Max, who only helps him to complicate Vlad's plans, to find help for disarming the bomb. After being escorted and protected by Max, Vinnie and Max are caught by Vlad in Mona's funhouse. Vlad eventually detonates the bomb, killing Vinnie.

While examining the tombstone of Vinnie Gognitti in the Golgotha Cemetery, Max remarks that the mobster's antics during the war with the Russian Mob brought the Punchinello family "to it's knees" and that they're "still struggling to get back up."

After Max escapes to Sao Paulo, a mob war starts between the Punchinellos and the DeMarcos.

Many Mafia men are fans of Captain BaseballBatBoy, Lords and Ladies and Max Heat. 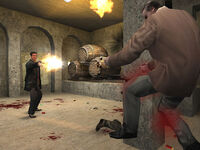 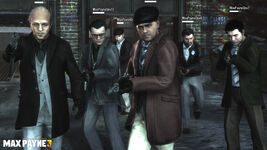 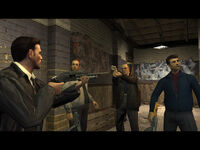 Add a photo to this gallery
Retrieved from "https://maxpayne.fandom.com/wiki/Punchinello_Crime_Family?oldid=23166"
Community content is available under CC-BY-SA unless otherwise noted.