In Max Payne 2, the pump-action is lackluster in damage; however, it is still a fairly reliable weapon to use, albeit at a much closer range. The pump-action's shortcomings of the first game are alleviated in part by a faster fire rate, and the quick reload during bullet-time. The pump-action makes its debut early on in the game, where it is useful for heavy-duty fights unsuited for the 9mm pistol. However, it is soon outshone in terms of damage by weapons such as the Striker and Kalashnikov, and in terms of range and accuracy by the MP5 and the M4. 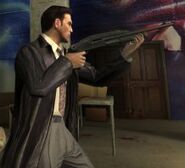 Retrieved from "https://maxpayne.fandom.com/wiki/Pump-Action_Shotgun?oldid=6702"
Community content is available under CC-BY-SA unless otherwise noted.