Prologue (Waking Up from the American Dream)

The Genius of the Hole

Too Stubborn to Die

The prologue of Part III is the third and final prologue in Max Payne 2.

Max, near-death after falling nine feet and being shot twice in the chest by Valerie Winterson, has a nightmare about his fears while being rushed to the hospital for his injuries. Max imagines Mona straddling him while being wheeled into the operating room, and he later "wakes up" to moaning sounds. Max sits up and sees Mona, and she signals that she wants him to follow her. Max gets out of bed and starts the chase, following her through the hospital corridors until he is suddenly in the mental hospital like cells and sees doubles of himself in the cells muttering nonsense. The cell room is called "The Pink Bird Mental Institute" like in the show Address Unknown. One of them keeps thinking about several things. Another one of them feels sorry about murdering his wife and daughter, he says he buried them under the rosebush in the backyard, possibly Max remembering what the mobster was talking about in the police station. There was another version of himself talking in anger wanting revenge. Another version of Max not knowing who he really is. When Max gets to the end of the hall, he hears intensified moaning sounds and sees that Mona is showering.

Following the echoes of Mona's cries, Payne continues walking through variations of the police lock-up until he is in the shot-up guard room where he called Alfred Woden earlier. Max sees the confrontation playing out on the nearby television with Winterson, Mona and Max, and it ends in the same way except with a title card at the end that states "A BINARY CHOICE." Max works his way upstairs and sees Jim Bravura sitting against a wall, bleeding from what appears to be gunshot wounds; Bravura tells Max that he must solve the case and find out who betrayed them. Bravura succumbs to his wounds and Max moves on through the building, finding a recording of his own voice attempting to discern what is worth focusing on in terms of the case, concluding that Winterson's murder is an essential key and that Payne himself is somehow responsible for some of what has transpired during his investigations.

Max resumes working his way up the nearby stairs and goes through a door, reaching his and his co-worker's desks, and witnesses a twisted version of Mona and Winterson's stand-off. Mona tells him that the detective is "one of them" and that "she is after us." Eventually they both turn their guns on Max and open fire, and everything darkens. The story then shifts back to the present outside the manor, which is first seen in the opening cutscene. The NYPD begin to storm the manor, and after Max is heard questioning whether action or inaction is better after escaping from self-made destruction, the chapter ends. 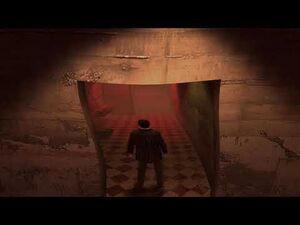 Retrieved from "https://maxpayne.fandom.com/wiki/Prologue_(Waking_Up_from_the_American_Dream)?oldid=29753"
Community content is available under CC-BY-SA unless otherwise noted.