Elevator Doors
The prologue of The Darkness Inside is the first prologue in Max Payne 2: The Fall of Max Payne.

The game opens with a graphic novel cutscene of Max Payne with Mona Sax, reminiscing on regrets and the past. As they share a kiss, the New York City Police Department surround their location at a manor. The story then redirects to hours earlier, as Max is hospitalized due to severe gunshot wounds; the result of an as-of-yet unknown confrontation.

After Max stabilizes, he awakens in a hospital bed, reflecting on the events that had put him there. He climbs out of the bed, puts his clothes on, and begins to make his way towards the exit, all while experiencing auditory and visual hallucinations likely brought on due to his head trauma and still being under the influence of the drugs he had been given during his hospital stay. Shortly after making his way through a few rooms for patients, Max finds a ringing phone and hears a voice from his past, then a Doctor Magdalena is heard reporting that the detective that was brought in was declared dead on arrival and the body is being brought instead to the morgue.

Max then goes into a nearby operating room and finds a dead janitor with a gun laying next to him, and at that moment an armed man walks into the room communicating with someone about killing Max. As Payne announces himself and commands the would-be assassin to freeze, the criminal begins to open fire on him, but he isn't fast enough and Max takes him out. After leaving the room, he reaches the reception area and takes an elevator down to a lower floor to exit the hospital.

The elevator doors opens to reveal a few hospital staff and Max's boss, Homicide lieutenant Jim Bravura. Bravura begins both questioning and accusing Payne of killing the detective currently in the morgue, but before Max responds with more than a few words, Bravura is shot in front of him by another assailant. The shooter then begins shooting at Max as he attempts to close the elevator doors, but the commando then shoots a nearby oxygen tank, sending the exploding canister into the adjacent elevator car and severely damaging both elevators. Max survives the explosion and gets out of the wrecked elevator from below and walks into the morgue area of the hospital.

As Max stands over the body of his former colleague, the story shifts back to Max and Mona in the manor, with Max remembering that the incident at the hospital wasn't really the beginning of the whole ordeal. Instead he concludes that the events which led to his current situation began even earlier, and the chapter ends.

Max decides to leave the hospital

Max ends up in the morgue 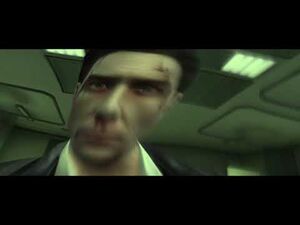