"To make any kind of sense of it, I need to go back three years. Back to the night the pain started."
―Max Payne

In 1998, three years prior to the chapter Roscoe Street Station, Max was a detective for the NYPD. Alex Balder being one of Max's closest friends, attempts to get him to work for the DEA with him, but Payne says undercover work would be too much for him and his family. When Max gets home, he is puzzled by the silence and no response from his wife, Michelle Payne. Max cautiously traverses through his home and finds a strange "V" and syringe graffiti written on a wall. As Max continues he hears his phone ring, and after answering and telling the mystery person on the phone to call 911, they tell the detective that they cannot help him, and the person then hangs up on him.

Max enters his living room and begins to walk upstairs, and once on the second story landing, he hears Michelle yelling and his baby crying. Max shouts for Michelle but she is in too much danger to respond. Max attempts to run through the bathroom door but finds the door obstructed, and Michelle is killed moments later. He then proceeds towards his daughter's room and a Valkyr test subject bursts through the door, and Max tells him to drop the gun; he refuses to do so, and proceeds to try and kill Payne. The crazed gunman is taken down by Max, and another test subject comes out but he is also killed. Max rushes to his baby's room, only to find his daughter has been shot dead. After being filled with contrition for a brief moment, Max continues towards his bedroom as he hears another test subject in the room shout "THE FLESH OF FALLEN ANGELS!!!" Max gets into the room and quickly shoots the last gunman, but he is too late as his wife is already lying dead on the bed they shared. Filled with despair, Max screams as he holds his wife's body in his arms.

After the incident, Max contacts Alex Balder to notify him of his transfer to the DEA. It takes three years before they make any progress in the Valkyr Case, but Max finally gets a tip that Jack Lupino of the Punchinello Crime Family is trafficking Valkyr. Max begins his quest for revenge on whoever sent Valkyr test subjects to his house.

Complete 'Part I Prologue: The American Dream' on any difficulty 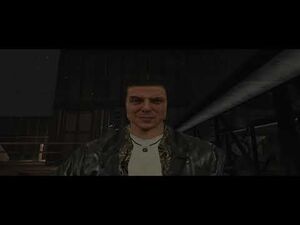 Retrieved from "https://maxpayne.fandom.com/wiki/Prologue_(The_American_Dream)?oldid=29684"
Community content is available under CC-BY-SA unless otherwise noted.