Prologue (A Bit Closer to Heaven)

Take Me to Cold Steel

The prologue of A Bit Closer to Heaven is the third and last prologue in Max Payne.

The chapter starts with Nicole Horne departing Punchinello Manor after killing Angelo Punchinello and drugging Max Payne with a large dose of Valkyr, leaving him for dead in the manor. As she and her men head to Cold Steel, Max finds himself in another nightmare about the death of his family; once again exploring a twisted dream version of his old house, he hears his wife and follows her voice through the house.

Upon going through a door, Max finds himself in a room very similar to Punchinello's office, but the perimeter of the room is on fire. He sees a letter on the desk, and it reads "You are in a graphic novel." After reading the letter, he answers a nearby ringing phone and hears a familiar voice speaking nonsensically. Going into the next room, Max is once again in the fiery office, with another letter and ringing phone on the desk. Reading the letter, Max discovers that he is also in a computer game, reflecting on the various abilities and weapons that he possesses. Answering the phone, Max hears the same familiar voice, telling him that he's been drugged and how he needs to wake up. Through the next door, Max is seemingly back in the dream version of his house and continues exploring, climbing stairs, and walking through familiar, yet distorted, rooms.

After going through an upstairs room and into a long corridor, Max comes across another blood trail, eventually finding a bloody crib. After seeing the crib, Max is suddenly in his and his wife's bedroom, with his wife's dead body on the bed and himself as an NYPD Detective. Max screams "Murderer! You killed her!" at his other self, shooting him down. Max then recalls his wife mentioning a strange memo that came across her desk possibly regarding Vikings. Max then interrupts her, saying he will talk to her more about it late (what, in fact, never happened).

On the PS2 version, this chapter is divided into three sub-chapters: A Vortex of Green Blood, Funny as Hell and The Killer Was Smiling.

Complete 'Part III Prologue: A Bit Closer To Heaven' on any difficulty 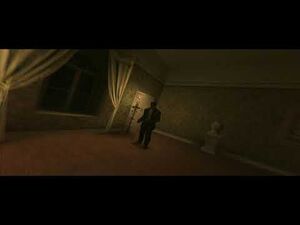 Retrieved from "https://maxpayne.fandom.com/wiki/Prologue_(A_Bit_Closer_to_Heaven)?oldid=29700"
Community content is available under CC-BY-SA unless otherwise noted.