The prologue of A Binary Choice is the second prologue in Max Payne 2.

Back at the precinct where he works, Lt. Bravura strips Max of his guns and hands the Cleaner Case to Valerie Winterson; Bravura's actions are a response to Max working with Mona Sax, who is a wanted criminal. The lieutenant then gives Payne his first assignment: writing a report on what happened at the apartment building earlier. Max begins typing the report at his desk when Det. Winterson's phone begins to ring next to him. When he answers, the person on the other end hangs up and as Max walks away, a nearby police officer remarks that the detective has been protective of her phone calls recently, he will also tell Max that Winterson has a blind kid and that she kicked out her husband some time ago.

Payne goes into the nearby interrogation room and sees a lineup of three women (one is Mona, and another one of the woman shares Violet's character model) on the other side of the glass in the interrogation room, with Winterson getting a witness to identify Mona and connect her to one of Winterson's cases. Max leaves the room after everyone except the witness, and he hears Valerie on the phone leaking information about the case. When confronted, Winterson tells Payne that the "proper authorities" were just being notified, and then she storms off to Bravura's office, leaving Max suspicious of her and her motives.

Max then goes downstairs to the precinct lock-up in order to see Mona, and when they see one another, Mona expresses how dangerous it is for her being locked up in one place, as it makes her easier to assassinate. She then tells Payne that Alfred Woden can verify everything that she's told him, and so Max uses a nearby office's phone to call Woden; he doesn't answer but Max leaves a message for the Senator when a bomb suddenly goes off somewhere in the building.

The police rush towards the cells where the Cleaners have rushed in. Max watches the cells over a security monitor in the office and witnesses Mona avoiding the assassins and escaping from her cell. He works his way through the lock-up, killing Cleaners and seeing Petersburg and several other now-deceased officers on the ground. Another Cleaner van arrives full of assassins, and when Max disposes of them as well, he runs out of the parking garage and the station, but as he reaches the street, Vladimir Lem pulls up.

Max is suspicious of his timing, but gets into his car and immediately notices a large Captain BaseBallBat-Boy costume. Vlad mentions it as a "trojan horse" in the war he is engaged in with Vinnie Gognitti. Max requests a ride to Coney Island, then brings up the Inner Circle but Vlad dismisses them as nothing more than one step up the ladder of organized crime. They briefly discuss Mona as well as Vlad enigmatically bringing up how making the wrong choice, if there is no other choice, isn't the wrong choice at all, but simply fate. Max argues that it isn't that simple and as they disagree, the chapter ends. 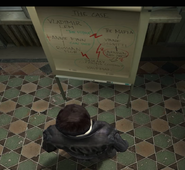 Retrieved from "https://maxpayne.fandom.com/wiki/Prologue_(A_Binary_Choice)?oldid=26377"
Community content is available under CC-BY-SA unless otherwise noted.