Police Brutality is the seventh chapter of Part I in Max Payne.

Max is following Vinnie through the trains until Vinnie jumps to another rooftop where Max proceed to do the same. Max kill all the mobsters attacking him and chase after Gognitti with a police helicopter following Payne. Vinnie ask the gangsters to slow Max down but failed and the chase continues.

Max traverse down to reach a construction site where Vinnie escape through a lift. Max kill many gangsters on his way to find the door is blocked by Vinnie. Another path he saw was through the ceiling where he saw 2 gangsters securing profit for the Valkyr deal. He crash through the ceiling and kill the 2 gangsters and proceed on his way. He soon found Vinnie blood trail to the apartment.

In an apartment room, he saw a news of Jim Bravura interviewed about Payne's chase. Max knew that Bravura is a good guy and he threw his chase down in couple rooftops. Max continue to kill more Punchinellos until Vinnie found out the door is locked and forced to fight Max. Max fight the remaining Punchinellos defending Vinnie and corner Vinnie.

Max interrogate Vinnie about Lupino's location and threaten him with a gun to his head, only to reveal the gun is empty. Vinnie broke and tell Max that Lupino is in his own nightclub, Ragna Rock.

On the PS2/Xbox version, this chapter is divided into three sub-chapters: Better than the Last One, Ice Hard and Slick and All a Blur.

Complete 'Part I Chapter 7: Police Brutality' on any difficulty

Land on the fence to break your fall 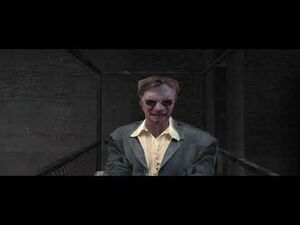