"I walked straight in, playing it Bogart, like I'd done a hundred times before."
―Max Payne describe his trip to the hotel.

Playing It Bogart is the third chapter of Part I in Max Payne.

Max decide to first head off to Lupino's hotel to find Jack Lupino who Max think is responsible for Alex's death. He meet up with the Finito Brothers, owners of the hotel to find the whereabouts of Lupino. However, the brothers reveal to Max that he is exposed as an undercover cop. Soon, a gunfight ensue with Max killing the brothers.

After dealing the mobsters outside the office, Max check the office to see a letter from Vinnie Gognitti, Lupino's right hand man about Valkyr deal with a notorious criminal, Rico Muerte supervising it. It also mentioned 313, the room where Rico is staying. Max can't leave the hotel easily as the elevator is broken and the stairs is locked by the mobsters, so he have the leave through another way and facing the mobsters in the hotel.

As he leave to the roof, he heard a news radio about the Valkyr Case with Alex's death and Max as a suspect. Max fought his way through the hotel 3rd floor against the Punchinellos and Valkyr Junkies. On his way, he saw the news in the TV and a body on the bed. He reach Rico's room to be found booby traped, Max avoid the trap and enter the room to find a letter from the head of the Punchinello, Angelo Punchinello about the Valkyr deal. Max find it useless as he is a fugitive and already war with the Punchinellos.

He headed second floor through a hole he made with an exploding boiler and fought his way through. He enter a prostitute named Candy Dawn's room and read her diary about selling sex tapes to the highest bidder, he also saw the collection of tapes in a secret room including a secret camera behind a painting near a bed. He soon reach an elevator that take him to the hotel's basement.

On the PS2/Xbox version, this chapter is divided into three sub-chapters: Playing It Bogart, Without Warning and A Few Hundred Bullets Back.

Complete 'Part I Chapter 3: Playing It Bogart' on any difficulty 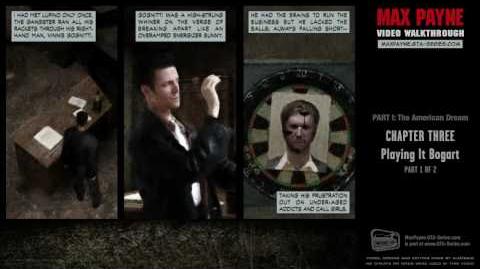 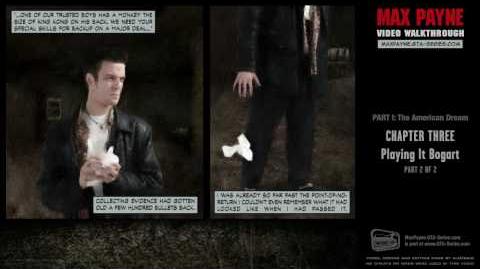