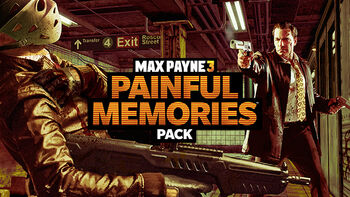 Painful Memories is a DLC for Max Payne 3. This was set to launch in October, 2012 on Xbox LIVE, PlayStation Network and PC, but was delayed until December 4th.

Painful Memories is a map pack.

An intense shootout in the cathedral from Marty's Bar map.

The new United Souls of the People faction

Map of Canal De Panamá
Add a photo to this gallery

Long Arm of the Lawless

Kill Max Payne in Panamá as one of the De Marcos

Register a headshot on an enemy affected by the Hangover burst

Retrieved from "https://maxpayne.fandom.com/wiki/Painful_Memories?oldid=19150"
Community content is available under CC-BY-SA unless otherwise noted.