"We both know this would end in pain and suffering."
―Max Payne monologue his confrontation with Nicole Horne.

Pain and Suffering is the final chapter in Max Payne.

Max Payne arrives at Nicole Horne's penthouse suite at the top of the Aesir Headquarters building to find Horne waiting for him. She tells Payne there's no way for him to live and escapes through a security door, leaving the Killer Suits to deal with him. Max shoots them down and is then forced to take cover behind a pillar to avoid gunfire from a helicopter. After this, Max gets out onto the balcony and runs along one ledge onto another, avoiding more gunfire from the chopper.

Max eventually corners Horne in a conference room, but must first deal with the remaining Killer Suits. Horne, in the meantime, vanishes but Max finds the secret door she escaped through and he chases her out onto the roof of the building. She then goes through a security gate and locks it so Max can't get through and she boards the aforementioned helicopter, but it can't take off immediately because of the wind. As the helicopter awaits clearance to take off, Max destroys the cables holding the building's radio mast in place, and the mast falls on top of the helicopter as it begins to take off, killing Nicole Horne.

Moments later, Max is surrounded by the NYPD SWAT team and he surrenders to them, feeling relieved that he finally avenged his wife and daughter. As Max is led outside by the police, the Deputy Chief of the NYPD comments on the difficulty in catching him before ordering his men to take Max to central booking; Max sees Alfred Woden in the crowd, thinking that he'd better keep his end of the bargain, and as Max is put in the back of a police car, the game concludes.

On the PS2/Xbox version, this chapter is divided into three sub-chapters: A Warrior's Heaven, A One-Way Demon Ride and Pain And Suffering.

Complete 'Part III Chapter 8: Pain And Suffering' on any difficulty

Complete the game on any difficulty setting

Complete the game on the 'Hard-Boiled' difficulty setting or higher

Complete the game on the 'New York Minute' difficulty setting

Complete the game without using Bullet Time or Aim Assist

No Payne, No Gain

Complete the game in less than 3 hours on any difficulty

Finish Part III in under 1 hour

A Bit Closer to Heaven

Complete Part III on any difficulty.

Complete the game in Hard-Boiled mode.

The mast hitting the helicopter

A bit closer to heaven...

Max after getting arrested
Add a photo to this gallery 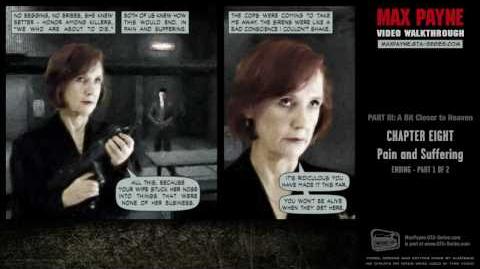 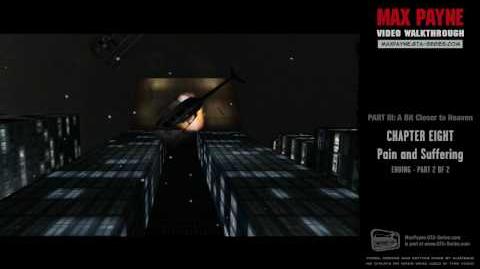