Nothing But The Second Best

Something Rotten in the Air

"Nothing but the second best, why can't we sit over there, mano?"
―Marcelo talking to Alphonse over Claudio's seat

Nothing but the Second Best is the second chapter in Max Payne 3.

It starts with Max drinking and taking drugs as his usual habit before vomiting in the sink. He headed to bed for the job. 5 days after the kidnapping, Max and Passos escort Marcelo, Fabiana and her sister, Giovanna to a nightclub as part of her routine. During the trip, the trio are drinking and thanked Max for the rescue. Giovanna also mention about the missing people happening in the favela.

Max escort the trio while Passos stays in the helicopter. They reach to the elevator to arrive in the club and introduced by the club manager. They have a small talk and soon arrived at the party floor. Fabiana and Giovanna went to the dance floor and partied while Max and Marcelo head to the bar. Marcelo got angry as his VIP seat have been taken by the star midfielder Claudio. He decide to drink instead and insult Claudio quietly. Max and Marcelo had a small talk before meeting another friend. Max express his hatred of the nightclub with music and people with it and take a drink to compensate.

Unfortunately, the same criminals from the previous kidnapping attempt stage another kidnapping and shoot the place up. Claudio attempt to intervene but got shot to death. Max intervened and kill several gangsters after pushing one into the ground. He tried to chase to the kidnappers but found the door locked, the leader order to flank Max through the bar but Max knew their ploy and finish all criminals. He go through the alternate way and kill the gangsters on his way. He reach the corridor and find panicked people and wounded manager, Max calls Passos to alert the danger and order the manager to lock in order to prevent any escape. Max kills every criminals on his way in the lounge as he track down the kidnappers. After clearing the lounge, he head to the kitchen and kill more criminals.

He managed to reach the club restaurant to find the leader along with Fabiana and Giovanna nearby. The leader order additional men to slow down Max but the group are all neutralized. Despite Max reaching the elevator, the elevator is used and the glass were bulletproof. Max use an alternate route through the window lift near the balcony. As he went up to the roof, he is gunned by the gangsters' helicopter. Fortunately, Max managed to climb up on the roof. As the gangster corner Max, Passos helicopter arrived and Max managed to climb with the help of Marcelo.

They pursue the gangsters to find them boarding the helicopter, Giovanna managed to escape whereas Fabiana is held hostage by leader and gangsters. Although Max want to pursue the helicopter but Passos focus on rescuing Giovanna instead. He order Max to grab a rifle to protect Giovanna, as she escape the criminals trying to catch her, Max shot every criminals who pursue her. She managed to find safety and they have to reach the helipad to secure her. However, the helipad is filled with gangsters and attempt to shoot down using a RPG. This nearly drop Max who later hang on the helicopter and shoot any incoming missile and kill the gangsters on the helipad.

After the shooting, he continue to find Giovanna and gun down any criminals on his way. He managed to find her and Passos reunite with Giovianna. Despite this, Fabiana was kidnapped and Max felt that he failed his job as bodyguard. 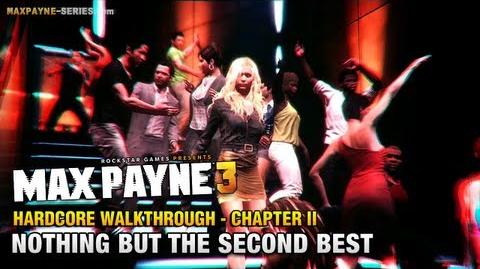 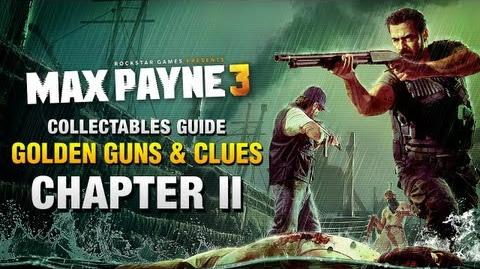 Fabiana partying, before she gets kidnapped by the CS

Serrano orders his gang to protect him from Max

Get 6 Kills While Diving Through The VIP Window [FREE AIM]

Retrieved from "https://maxpayne.fandom.com/wiki/Nothing_But_The_Second_Best?oldid=29575"
Community content is available under CC-BY-SA unless otherwise noted.