"There's no 'us' in this. You area a murder suspect. I should take you in."
―Max denies his relationship with Mona.

No 'Us' in This is the fourth chapter of Part I in Max Payne 2.

Max answers his door after hearing someone knock and discovers it is Mona Sax, and she tells him that they are both in danger due to someone putting contracts out on them. While Max is listening to her, he looks out the window and notices a sniper ready to fire at him from a window across from his. The sniper begins firing at Max's apartment, then Mona tells him that they are after her and that she has to leave.

He calls Valerie Winterson for help, telling her that an unknown number of people are trying to kill him at his apartment, then quickly gets off the phone to chase after Mona. Leaving his apartment and following Mona to a door that becomes locked from the inside, Max attempts to go around the building in order to find her again. After an encounter with a neighbor defending her apartment from one of Max's would-be assassins, he climbs across windows ledges as more Cleaners show up and open fire on him, attempting to shoot him off the small ledges. Max takes them down and continues searching for Mona, going through other apartments and interacting with his neighbors while killing any Cleaners that he runs into.

Eventually, Max reaches the apartment the sniper from earlier was camped out in, discovering surveillance equipment and Max's recorded phone conversations. Just after that his apartment is blown up by inept Cleaners who were trying to rig it with explosives but failed. Max then walks through the adjacent hallway, and ascends up the staircase killing more Cleaners. At the top he finds the door to the suites locked. Descending down the adjacent elevator, Payne reaches the first floor encountering more Cleaners and an especially shabby-looking neighbor, who tells Max that the Cleaners have locked the doors leading outside from the other side and that the only other way out is through the suites, which is locked by a key code. The neighbor tells Max that Ed the janitor knows the key code, so Max goes to the basement to locate the janitor.

Once Max locates the janitor and he reveals the code number, "667: The neighbor of the Beast", the NYPD detective then goes back up to the 7th floor by elevator, encountering more Cleaners on the way. Going through one of the building's suites and finding its resident dead on her couch, Max goes out of a nearby window, making his way across more window ledges until he finds an open window on a lower floor in another part of the building complex. Climbing inside this window, Max realizes that the explosion that originated in his apartment has set the building on fire; and with Max now trying to get out of the building more than ever, the chapter concludes.

On the PS2/Xbox version, this chapter is divided into two parts: Chapter Four: No 'Us' in This and Chapter Four Continued... 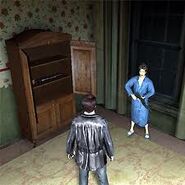 A kindly neighbor offering her shotgun to Max

Retrieved from "https://maxpayne.fandom.com/wiki/No_%27Us%27_in_This?oldid=25666"
Community content is available under CC-BY-SA unless otherwise noted.