Mike (Russian: Майк) , known better as "The Cowboy" (unknown - 2003), was a member of Vladimir Lem's Russian Mob. His exact rank in the organization was unknown, but he possibly was Lem's bodyguard or a mafia lieutenant.

A Russian mobster with an affection for Western films and themes, as well often mimicking them, Mike was a rather cheerful and relaxed person like his boss, yet an expert firearms wielder, able to take down a small group of mafia goons by himself and his trusty Kalashnikov.

In 2003, Mike assisted in defending Lem and his restaurant, Vodka, from Vinnie Gognitti and the Punchinellos, being aided by the NYPD detective Max Payne. The two managed to kill the assailants, save Lem, and scare off Gognitti.

Later that year, Lem betrayed Max, leading the detective to attack Vodka. Mike, who was in charge of the restaurant in Lem's absence, ordered his fellow mobsters to eliminate Max.

Max made his way to Vlad's office, finding Mike and other mobsters guarding it. Max engaged the mobsters in a gunfight, resulting in Mike's demise.

He got his nickname, "the Cowboy," from his affection for stereotypical Western films and symbols, such as "Billy the Kid." It is also known that he was a fan of "The Adventures of Captain BaseBallBat-Boy", commenting that it is a good and funny show.

"Hey! You're Max Payne! [...] Max, I'm Mike, one of Vladimir's friends. You are the sheriff? Well, how about making me your deputy?"
―Mike introducing himself to Max Payne.

In 2003, the underboss of the Punchinello Crime Family, Vinnie Gognitti, launched an attack on a restaurant owned by Vlad, Vodka. Gognitti's men killed many of Vlad's men, but Mike and Vlad himself survived. [2]

Mike first met Max Payne after he solely killed a small group of Gognitti's men, introducing himself as Lem's friend, and helped Max in the latter's fight to save Lem. The two were able to kill the rest of Gognitti's men that were at the restaurant, using ammunition stashed around the building inside boxes. [3]

Mike helped Max find Lem, who was outgunned against Gognitti and his men. Hearing Max, Gognitti sent his men to finish off him and Mike, who fended them off. [4]

As he escaped due to the police's arrival, Gognitti shot at Mike and Max, but missed. They approached Lem, who greeted them as his heroes. As Max and Lem went to talk, Mike was possibly either checking the damage done to the restaurant, or went to talk to the police officers. [5]

After Max understood that Lem had betrayed and lied to him all along, Max went to Vodka to confront Lem, only to find him absent while Mike was put in charge of the club.

Max stormed the club and killed the two guards who were protecting the entrance. Mike identified Max, informing his comrades that the detective was the intruder. As Max fought across the club to get to Lem's office, Mike taunted his former ally through the public address system, telling his men to kill the detective, and asking for the "score."

Eventually, Max got into Lem's office, guarded by Mike and another mobster. Max engaged the mobsters in a short gunfight, in which Max killed Mike's partner, and soon Mike himself.

Similar to his boss Vlad, Mike was often in a cheerful and relaxed mood; much of his fight at Vodka served as a comical relief, and his conversations were often humorous. Even during dangerous times such as gunfights, Mike taunted his enemies, such as Gognitti's mobsters and later, Max Payne.

His personal habits seemed to be his fondness of Western films and themes, often adding some Western-themed puns in his quotes. Mike was also watching the The Adventures of Captain BaseBallBat-Boy, saying that it is a good show and "very funny baseball bat."

Despite his calm nature, Mike iss very experienced with firearms, managing to solely kill four Punchinello goons using his Kalashnikov. This too was seen during his fight against Max, with Mike proving himself to be more threatening than Lem's other men.

By 2003, Mike was a man of average size, around the height of Max and Vladimir. He had a short combed blonde hair, and hazel eyes. He also had a few light-colored bristles on his face.

While fighting alongside Max Payne to defend Vodka from Vinnie's goons, Mike wields a Kalashnikov assault rifle, with which he is very effective and accurate. Later in the game, when he is faced as an enemy, he instead wields dual Ingram machine pistols. Mike himself is slightly more durable than a Commando, but slightly less durable than Kaufman, requiring about 9 Beretta 9mm pistol shots to kill. Mike actually has a similar amount of health as Kaufman, but lacks body armor, giving him reduced durability. He also takes normal headshot damage, unlike Kaufman and Vlad who resist headshots.

When confronted as an enemy, Mike is holed up in Vlad's office, busy using the club's PA system to taunt Max over the loudspeakers. He is accompanied by a single Commando. The two of them are facing the PA microphone with their backs turned to the door, and can be shot in the back if Max acts quickly enough after busting into the office.

Mike is slightly tougher than an average enemy, but weaker than the other bosses such as Vlad and Kaufman. When Max encounters him for the boss fight, Mike's back is turned. As such it is relatively easy for Max to kill him. Two shots to the head with a high caliber weapon or a direct hit with a Molotov Cocktail should be enough to incapacitate Mike. 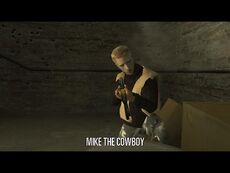