Michelle Payne is late wife of Max Payne which she was killed by Valkyr test subjects in 1998.

Michelle Payne was born on May 12, 1964. At some point during the mid 1990s, she began to work at a District Attorney's office.

The two began to hang out together, with Michelle often teasing Max, and married six months after meeting each other, circa June 1997. The two went to Montauk on their honeymoon. Nine months later, on February 4,1998, she gave birth to Rose.

Her husband Max arrives at the Payne residence at the moment of its invasion and hears her screaming in terror for help. Although the detective rushes to aid her, killing the invaders in the progress, he arrives too late and, to his horror, finds Michelle and Rose shot dead. Max holds Michelle's corpse, whilst screaming in anger. 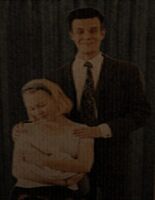