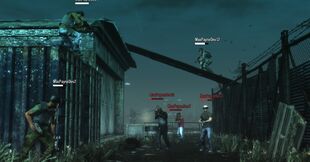 Max Payne 3 is the first of the series to introduce a multiplayer mode. This allows players to play online with their friends, family or strangers. This mode has a wide variety of different game modes to suit the player, from Gang Wars which consists of series of chapters that corresponds to Max Payne's story to a simple Team Deathmatch where two teams battle each other and gather kills in a certain time in order to win the match.

Players can create up to five complete player Loadouts that can be customized to make sure they're equipped with the perfect set of Weapons, Bursts and Items for every battle and to suit their playing style. Different loadouts will drastically change the gameplay experience, as custom combinations of Weapons, Bursts and Items affect player speed, stamina and health regeneration.

There are four Preset Loadouts, three of which are available to the player from the start and one which is unlocked at level 3. Each of the preset loadouts have their own advantages and disadvantages, the four preset loadouts are:

There are special abilities players can use in the multiplayer, called bursts. They are charged by building up the adrenaline and have 3 levels of potency. Players can choose which bursts to select to play with.

Players can create their sets of loadout items before the multiplayer matches. These items each offer specific benefits and can create different styles of play.

All Handguns can be dual-wielded

There are many characters to choose from to do battle with in multiplayer. There are NPCs from the story mode of the game, special characters which were modeled after Max Payne fans which won a Twitter competition (see here for details) and character skins from the previous two Max Payne games (The Classic Character Pack, for example). But note that: some factions or characters do not appear on singleplayer.

Below is a list of player titles which can be earned in Max Payne 3's multiplayer:

NOTE: Other Titles can be unlocked by completing Payne Thresholds.

When playing multiplayer, a player can gain experience by killing other players, assisting team mates, completing grinds, winning feuds and settling vendettas. When the player gains enough experience to be promoted to the next rank, they can earn more cash, unlock new avatar items, titles, weapons and other loadout items. A player can be promoted through a total of fifty ranks. When a player reaches Rank 50, they have the option to return to Rank 1 to gain Legend status just as it was in Red Dead Redemption.

For a full list of Multiplayer rank unlocks see here.

Once at Rank 50, the player can choose to gain Legend status at any time by selecting the "Legend" option from the Multiplayer menu, after which the player must work their way back up to level 50 in order to achieve the next Legend status. This can be done up to ten times, meaning the player will progress through a total of 500 ranks to reach Legend 10, the highest level in multiplayer. Gaining each Legend status takes away all weapons, items, upgrades, cash and earned loadout weight, but gives the player a new patch, title, unique Max avatar, and raises the cash multiplier for the Badge of Honor gear (unlocked at Legend 1). Below is a list of unlocks for each Legend status:

Crews of players can be created using Rockstar's Social Club. These are essentially clans with a leader and its own emblem. Players can join up to 5 crews. The crews aid collecting XP points faster, amongst other perks. The crews will be able to be imported into Grand Theft Auto V. 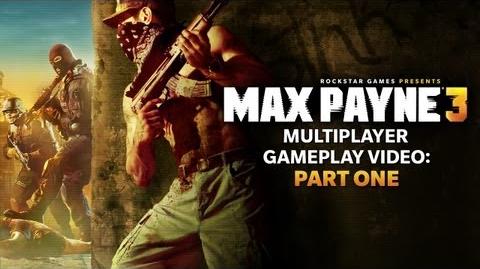 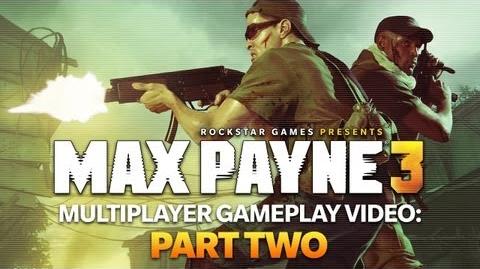 Tropa Z go into battle with the UFE

A player ready to ambush another

A player carrying a bag in Gang Wars game mode

A player Shootdodging out the window with a bag
Add a photo to this gallery
Retrieved from "https://maxpayne.fandom.com/wiki/Max_Payne_3_Multiplayer?oldid=26979"
Community content is available under CC-BY-SA unless otherwise noted.