For the character and the game series, see Max Payne and Max Payne (Series).
"Everything ripped apart in a New York minute... Max Payne is a man with nothing to lose in the violent, cold urban night. A fugitive undercover cop framed for murder, and now hunted by cops and the mob. Max is a man with his back against the wall, fighting a battle he cannot hope to win. Prepare for a new breed of deep action game. Prepare for pain..."
―Official description.

Max Payne is a third-person shooter action video game, the first title in the Max Payne series, created by Remedy Entertainment, and first released for the PC in July 2001, published by Gathering of Developers.

The game follows the protagonist Max Payne, an NYPD detective turned undercover DEA Agent whose life of the "American Dream" - a loving wife, a new born baby daughter, and a home in the suburbs - one day got shattered.

Themes of Norse mythology, and Hong Kong action cinema are prevalent throughout the game.

Max Payne is a third-person shooter, in which the player assumes the role of Max Payne. Initially, the player's only weapon is a Beretta. As they progress, players access other weapons including handguns, shotguns, sub-machine guns, long-range rifles, and hand-thrown weapons. To move the game along, the player is told what the next objective is through Max's internal monologue, in which Max iterates what his next steps should be. The prime emphasis of the series is on shooting. Almost all of the gameplay involves using Bullet Time to gun down foe after foe. Levels are generally straightforward, with almost no key-hunting. However, some levels do incorporate platforming elements and puzzle solving. Ammo is in virtually constant supply, as all enemies drop some ammo when killed.

Bullet Time is a very large part of the Max Payne universe. When triggered, it slows down the action around the player to allow them to have quicker reflexes, and thus lets them kill enemies with ease. The player's movement is slowed, but they are still able to aim and react in real-time, providing a unique advantage over enemies.

Max is able to perform a shootdodge manoeuvre, allowing him to leap into the air while still being able to fire his weapon. Shootdodge will end Bullet Time if it is used, unless you perform a Bullet Time Combo.

The story begins in August 1998 with Max Payne, a New York City police officer, returning home to find that a trio of drug junkies high on a new drug called valkyr have broken into his house. Max rushes to the aid of his family, but he is too late; his wife and newborn daughter have been murdered. After his family's funeral, he transfers to the DEA.

In February 2001, he is an undercover operative inside the Punchinello Crime Family, which is responsible for the trafficking of valkyr. B.B., a colleague in the DEA, gives Max a message asking him to meet Alex Balder, another DEA agent and a good friend of Max's, in the Roscoe Street Station. When Max arrives at the subway, Alex is shot by an unknown assassin. As a result, the police consider Max the prime suspect in Alex’s death. Additionally, the Punchinello family finds out that he is a cop and wants him dead.

Max goes after Jack Lupino, who oversees valkyr distribution for the Punchinello family. After gunning him down, he meets Mona Sax, a hired killer, who laces his drink with a sedative and leaves him to be found by the Mafia, who proceed to interrogate him.

Max escapes the Mafia and gains access to a shipment of guns belonging to the Russian Mob after killing one of their traitors. Max uses these weapons to infiltrate the house of Don Punchinello, the head of the Mafia. Max discovers that the Don is only a puppet in the valkyr market when the Don is killed by agents of Nicole Horne, CEO of Aesir Corporation, in front of Max. Horne herself then injects Max with an overdose of valkyr and leaves him for dead.

When he awakens, he pursues his only lead, Horne's last words, “Take me to Cold Steel”, heard just before he passed out. It leads him to a foundry with an old military bunker under it. He discovers that valkyr was the result of a U.S. military project to improve its soldiers' stamina and morale; the project was halted shortly after it began due to lackluster results. He also discovers that his wife accidentally found out about the project while working at the District Attorney’s office, so Horne let valkyr test subjects loose in Max's house.

After leaving the bunker, Max gets a call from B.B., who asks Max to meet with him at a garage lot. There, Max realizes that B.B. was the one who shot Alex, framing Max for his murder. A huge running gun-fight begins with Max giving chase through the garage lot. After killing B.B., Max gets a phone call from a man named Alfred Woden asking him to come to the Asgard Building. Alfred is part of a secret society called the "Inner Circle". Woden informs Max about who Nicole Horne is and says the Inner Circle cannot pursue Horne because "their hands are tied." They ask Max to kill Horne in exchange for ensuring that any criminal charges against him are dropped. After the meeting, the room is stormed by Horne's agents. They kill every person in the room except for Max, who manages to escape, and Woden, who pretends to be shot.

Max enters the Aesir Headquarters, where Horne is located. As he makes his way past security guards and mercenaries, he runs into Mona Sax again. She is shot by Horne after refusing to shoot Max. Max confronts Nicole and states that this whole thing started after Max's wife found out about the valkyr project. Horne runs to the roof of the building, boarding a helicopter. Racing up to the roof, Max shoots the guy wires of the building's antenna and hits it with the M79; the antenna snaps off the roof and comes crashing down on the helicopter.

The NYPD arrive at the scene, arresting Max. As Max is being led out of the building by the SWAT team, he sees Alfred Woden. Knowing that Woden will ensure his safe passage through the judicial system, Max smiles genuinely.

There exists a general misconception that the whole main story of Max Payne (excluding the prologue) takes place within one night. However, as a line of text informs the player during the beginning of the Roscoe Street Station chapter, the plot plays out during 3 nights in New York City covered by heavy snowfall. The most likely breaks between the nights could be the ends of the game parts, as the drugged Max Payne loses his consciousness two times in the game and (it could be suspected) sleeps through the days until the next night.

The plot of the game is most likely set in February 2001 because of the following:

In Max Payne there are many homages and references to John Woo. For example, the grey suit and tie Max is seen wearing at the beginning of the game, as well as the dual guns and jumping and shooting in slow motion. One of the game's difficulty levels is named Hard Boiled (as a Woo film), and John Woo's name is mentioned as a password for entering into a gangster hideout. Also, a quote by the main character when he is ambushed is "I made like Chow Yun Fat".

Remedy Entertainment took on the task of developing Max Payne in 1997 after shipping the racing game Death Rally. The most important part of Max Payne was planned to be, from the very start-up of production, its main character, around whom the rest of the game story would be built. The next goal was offering audiences an innovative gameplay, which took form as the bullet time, a pioneering form in the video game industry at its time.[1]

Since the shooter's inception, Max Payne, according to Scott Miller, was also envisioned as a transmedia franchise.[1] Max Payne indeed succeeded to be adapted to film in 2008, although very loosely, and to unanimously poor reviews.

Max Payne Mobile is the port of the game for the iOS and Android devices released in April of 2012. The platforms supporting the game are: iPhone 3GS, iPhone 4, iPhone 4S, iPod Touch 4, iPad 1, iPad 2, the new iPad, and certain (not yet named) Android systems.

The PC version of Max Payne has issues running on Windows Vista or Windows 7 operating systems: the music is compromised and missing in the game. Fans have created specific patches that fix the problem; they can be found on the internet for download. Also, if the Vista or 7 user installs a compatible Creative sound card in their computers, they can also fix the sound problem with Creative's own ALchemy program.

There are 22 chapters, 3 prologues, a tutorial, and one bonus level in Max Payne for the PC, while the PlayStation 2, PlayStation 4 and Xbox versions of the game have most of the PC version's chapters split into several sub-chapters. The Xbox version doesn't have the different chapter names as the PS2 version, but has additional loading screens in the levels. The remastered mobile version has the same chapter structure as the PC version.

When Max Payne was released for the PlayStation 2 and Xbox, due to hardware limitations, all of the chapters had to be divided up into sub-chapters. Or in the case of the Xbox version, only additional loading screens with none of the new chapter names.

Fly by your enemies and shoot them

Most of the time your gun will do the talking

You have a dozen weapons. Here: a sawed off shotgun

In slow motion you can actually see the bullets 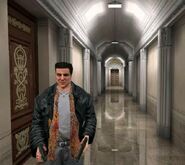 A rare picture: Max without guns pointed at him

Game is divided into many chapters and sub-stories

Intro, which actually comes after the game says its story

Three years ago... behind this door is your wife and some bandit, and you cannot do anything to help her. Thus you lay your hands on your gun and forget about a badge 'til you punish ALL the badguys

Occasionally, you can speak on the phone, or watch TV or some papers and/or shots, and you see that made in a comic book style

The real action starts two nights ago then the intro happens

As you went to meet a friend of yours, you ran into ambush instead

Judging by the look of this hotel, a man can get the wrong impression on situation

If you're a good shooter, even camera won't be a match to follow you sometimes

Each time you kill the last foe on the scene, the game will automatically go slow-motion

Max Payne against the exit doors, and he loses, hehe. Guess you'll have to find other way around afterall

Shooting from the ledge 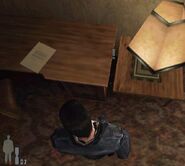 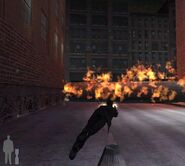 The burning cistern blocked this way, you'll have to find some other way if you wanna get around 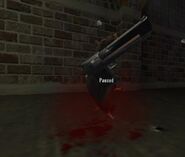 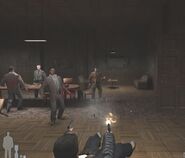 A drug deal goes bad... thanks to you 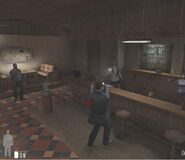 Rico Muerte and his "lady friend" try to waste you 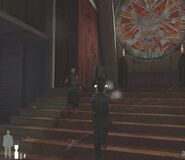 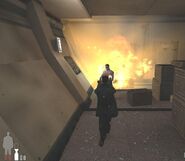 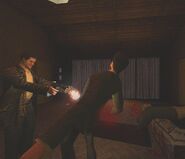 Max Payne fights and kills Max Payne... how existential can you get? 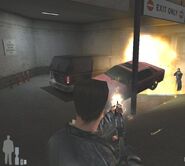 Max really knows how to make a mess 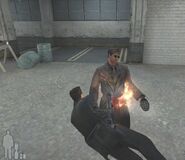 I don't care who you are, a shotgun blast to the stomach has GOT to smart 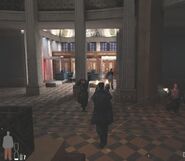 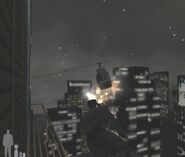 Gordon Freeman could take out an Apache with one hand tied behind his back. To be fair though, Payne doesn't have an HEV suit 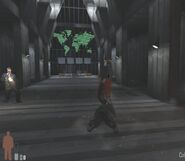 A bullet with Nicole Horne's name on it 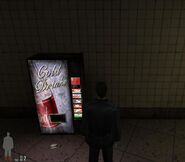 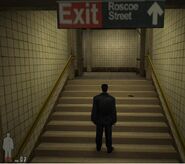 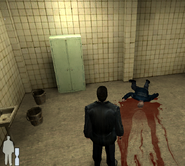 The subway, where everything begins 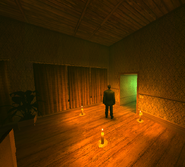 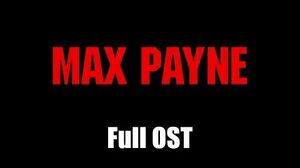 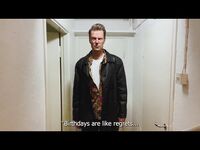 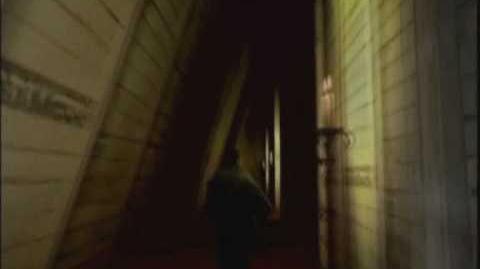