Template:CharacterInfobox Max Payne is an American police detective who goes on rogue, unstoppable, tenacious, and relentless killing sprees against felons, spanning a number of nights, all the while looking for truth to mysteries he finds in his life but mercilessly bringing death to all those who ever caused him pain. During his long and diverse crimefighting career, Max Payne works as a New York City Police Department Homicide detective and as a Drug Enforcement Administration undercover agent but abandons both posts when he sees the limitations of orthodox police work, instead preferring the chaotic, hot-pursuit-and-revenge-filled approach to extinguishing crime. With his criminal body count tallied in hundreds, Payne is responsible for single-handedly crippling the Punchinello crime family, crushing Nicole Horne's Aesir Corporation, terminating the manufacture and trade of the drug valkyr, and, along with Mona Sax, wiping out the mercenary and gangster army of the Russian Mafia boss bent on taking over the Inner Circle - Vladimir Lem.

Max Payne was an officer of the NYPD before his wife and baby daughter were murdered by valkyr-pumped madmen wearing green jumpsuits.

Three years later, during an undercover infiltration of Jack Lupino's mob group, Max's best friend Alex Balder is killed and Max is framed. With nothing to lose, Max goes after the Mafia during the worst winter storm in a century.

Payne chases after Vinnie Gognitti, a low-life Mafia leader, and leaves him bleeding in an alley after he gets the location of the Mafia underboss Jack Lupino from him. After killing Lupino, he meets a hired killer named Mona Sax in a gothic nightclub Ragna Rock and they learn they are both after the Punchinello crime family leader Angelo Punchinello.

Max Payne makes a deal with a Russian mobster Vladimir Lem: by killing Lem's traitor Boris Dime, he secures a stash of weapons for his vendetta.

He enters the Cold Steel foundry and makes its way to a secret base, where he discovers the Project Valhalla files and the secretive tests led by Nicole Horne that were responsible for the deaths of his family. As soon as the base is destroyed, he meets with B.B. Hensley, who betrayed him and killed Balder, and slays him.

Payne later meets Alfred Woden in the Asgard Building, who had contacted him on several occasions before, and learns about the Inner Circle and its wish for him to eliminate Horne without revealing any of her plans to the public. Woden promises the fugitive to acquit him of any legal charges if he manages to accomplish the task.

Finally Payne makes an assault on the Aesir Corporation HQ. Killing everyone in his way he again encounters Mona Sax and witnesses her get shot in the head. He then makes his way to the mainframe of the building where he disables any locks preventing him from reaching the penthouse.

Payne takes down the remaining guards covering Horne's escape in the penthouse and on the rooftop of the skyscraper. As Horne is boarding an armed helicopter and gets ready to depart, the broadcasting antenna starts to collapse when Payne cuts cables supporting it with his weapons and fires an M79 at it. The falling antenna crushes and destroys the helicopter, killing Horne.

The police arrive soon after in full force and take Max into their custody. Alfred Wooden with his immense political influence helps clear Payne of any charges.

In Max Payne, Max is undercover and so spends the game in typical street clothes: A leather jacket, a white T-Shirt and a pair of black pants. He is 6ft (183cm) tall.[1] In the second game, Max is back on the force, so he's kitted out in relatively smart office suit but still has his trademark leather trenchcoat. At the beginning of Max Payne 3, while still in New York, Max wears his tradition leather jaket, with a tie, a pear of jeans and sylish black boots. In the debut trailer for the game, Max was seen sporting a casual gray suit. During most of the game has a beard, but later in the game he is seen with a bald head, wearing an undershirt with shoulder holster for his hand gun(s), tan colored cargo pants, and tan boots.

Both games in the franchise are described as Film Noir stories and even though they both follow different strands with the original game being a revenge thriller and the sequel being more of a True Romance-style love story. Tackling insurmountable odds, Max faces every situation with a 'John McClane' type wit and a very dark sense of humor which fits perfectly with his nothing-to-lose demeanor. Also, as he is the hero, he has the power to enter bullet time, something only he and Mona can do, and the ability of being able to take vast amounts of damage while only needing a few painkillers to heal.

Max's bullet time is said to be Max going into a higher state of focus or what athletes call "The Zone".[Citation needed]

Max has a poetic sense of describing his actions. He does not believe his actions are heroic and he believes he should be punished for his actions during Max Payne. Max's pessimistic view on life and his inability to have fun is very noticeable as Vladimir Lem points out to Max in Max Payne 2.

Max also along with his dark humour is very morbid, in the original Max Payne he tends to make jokes even in the face of danger - one example is the conversation between Frankie "The Bat" Niagra - whereas in Max Payne 2 he makes no jokes and is hardly ever seen with a hint of humour.

Max Payne is the protagonist of the Max Payne series. However, he is not the only playable character in the video games, as the player can also control Mona Sax in some levels of Max Payne 2.

Template:Q The character of Max Payne was at the very center of the development of Max Payne. The main premise of the game was based on creating a well developed, strong protagonist. The creators wanted to provide a clear backstory and a strong motivation to Payne.[2]

The name "Max Payne" is a play on words, indirectly suggesting "Maximum Pain". Another Remedy game character, Alan Wake, is also a play on words: taking his first initial and his last name reads "Awake", a reference to Wake's fight with the darkness.

Due to the relatively low budget of the Max Payne game, Remedy had to use their staff in the in-game graphic novel scenes, leading to Max being played by Sam Lake, the head writer of the franchise, who gave him his trademark sneer look. For Max Payne 2, however, as this game had a larger budget, Lake declined the honor, and the actor Timothy Gibbs was assigned to imitate Max Payne, giving Max a more rugged, worn appearance.[3] James McCaffrey will reportedly act as Payne in motion capture sequences for Max Payne 3.

Max Payne is voiced by James McCaffrey. The actor was initially announced to not be returning to voice Max Payne for Max Payne 3, with Rockstar saying: "We need a voice that can symbolize an older, more mature Max Payne." When asked about a new voice actor, Rockstar said "we are pretty good at casting. Don't expect any major Hollywood names, but maybe minor names." Such decision proved to be highly unpopular amongst the fans of the series, who bemoaned that it was yet another radical move in a string of changes for the third game of the series (after the revelation of the change of the setting location from NYC to Brazil and the dramatic altering of the appearance of the protagonist). However, in May of 2011, Rockstar revealed that McCaffrey in fact will return to Max Payne 3.[4]

All the TV shows in both Max Payne games are based on the character's life, except for Max Heat.

The black suit and tie Max is seen wearing at the beginning of Max Payne could be seen as one of many John Woo film references.

Mentions in other works

In the Remedy game Alan Wake, multiple easter eggs referring to Max Payne can be found. One of the easter eggs suggest that Max was killed thirteen years after his revenge on Horne, that he was killed by a woman, and that he died in a city during the winter, likely New York.

In the game Grand Theft Auto: San Andreas, a bulletproof window glass could be found, with the words "Max Pane" written under it.

Max Payne can be seen in the game Grand Theft Auto IV in a Venturas Poker Challenge TV show on the in-game TV. 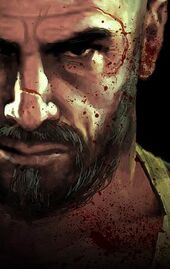 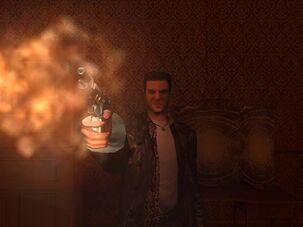 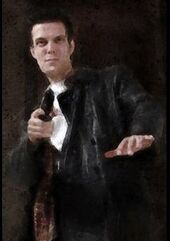 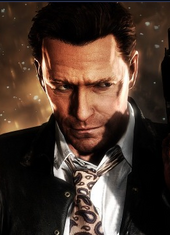 Max Payne MP3
Add a photo to this gallery 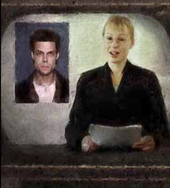 "...And the NYPD is currently in pursuit of Max Payne...Believed to be armed and extremely dangerous..." Kyra Silver reports.

Max Payne
Add a photo to this gallery

Retrieved from "https://maxpayne.fandom.com/wiki/Max_Payne?oldid=6483"
Community content is available under CC-BY-SA unless otherwise noted.