Max Payne 2
The MP5 (from German: Maschinenpistole 5, meaning machine pistol 5) is a submachine gun that is widely used in 2003 during the Cleaner Case. It is replaced with MPK, a shorter version of the MP5 in Max Payne 3.

The weapon has a fairly large ammunition capacity of 300 rounds, and while it cannot be dual-wielded, the MP5 is useful in nearly every combat situation; it has a high rate of fire, moderately high damage potential, and a fixed scope. As is the case with submachine guns, spraying bullets is an effective way to deal with enemies, but taking advantage of its scope and high accuracy grants the user maximum efficiency. The MP5 makes a good substitute for the sniper rifle in all but the most extreme circumstances.

Behind the Scenes[edit | edit source] 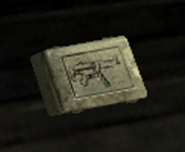 Retrieved from "https://maxpayne.fandom.com/wiki/MP5?oldid=26642"
Community content is available under CC-BY-SA unless otherwise noted.