Max Payne 2
The M4 is a weapon featured in Max Payne 2: The Fall of Max Payne. It is an all-purpose carbine assault rifle designed for the purpose of taking out a large number of enemies within a reasonable distance.

This weapon is also in Max Payne 3's multiplayer as part of the Local Justice DLC.

The M4 is essentially the perfect weapon. Its damage, ammo & mag capacity, and rate of fire match the Kalashnikov's, making it a good choice in any firefight situations. Unlike the Kalashnikov, however, the M4 also boasts perfect accuracy (a trait shared only by sniper rifles and the Desert Eagle), allowing the user to attain rapid kills over extreme distances although the ammo for this gun is very rare  throughout the game, so aiming for headshots as much as possible is a desirable course of action when utilizing this gun. Ammo becomes much more plentiful in Part III, where Lem's crew uses this assault rifle as a standard weapon along with the Kalashnikov and subtantial caches of ammo for this weapon can be found.

The M4 will generally kill in two or three hits anywhere to the body; its pinpoint accuracy allows for easy headshots, which are always one hit kills. The M4 has considerably better armor penetration than the Kalashnikov, though both guns do enough damage that the difference is inconsequential against most enemies.

In Max Payne 3 multiplayer, this weapon is capable of being upgraded with new attachments. Here is a list of the obtainable attachments: 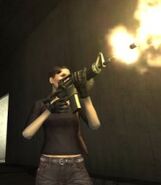 The M4 design in Max Payne 3

A player holding the M4 in Max Payne 3

Retrieved from "https://maxpayne.fandom.com/wiki/M4_Carbine?oldid=29481"
Community content is available under CC-BY-SA unless otherwise noted.