Luigi's Laundry was a launderette on the ground floor of one of the Mafia-controlled tenement buildings during the Valkyr Case in 2001.

The launderette was a small, three-room business within the tenement building that the Punchinello crime family likely owned. While laundry was most likely cleaned, as evidenced by several running machines during Max Payne's visit in 2001, the prices on a sign that listed laundry rates were off in regards to the worth of the business' offered services, and there was also a note in the corner of the sign that stated "no money back guarantee" and "results may differ." The odd business practices of a simple launderette were most likely due to the establishment being used as a front for a counterfeit money operation ran by the Punchinello family. Punchinello mobsters hung around in the back room where the counterfeit money was printed and they would illegally gamble while playing cards.

From the front door, there was a reception area and front desk to the right, as well as an elevator that led to the upper floors of the building to the left. At the end of the short hall was the laundry room, which contained many washing machines and dryers, and the adjacent back room, which had a large counterfeit money printer, a table with some chairs, a few broken washing machines, and a door that led to the back entrance in the alley behind the tenement building.

During the 2001 Valkyr case, Max Payne needed to gain access to the elevator inside the laundry to reach Lupino's suite, but when Max approached the back door, the guard at the door would not let him inside. Payne then found a man in a nearby abandoned tenement building who knew the occupants, so he held the man hostage in order to get inside. After the man told the password to enter the establishment, the particular individual turned out to be a thug that worked alongside the mobsters inside and was killed by Payne in the subsequent shooting. After he took down all of the Punchinello mobsters in the launderette, Max then used the elevator near the front door and proceeded further up into the building.

The password to enter the launderette is "John Woo," the name of a Hong Kong director whose films had a prominent stylistic influence on the Bullet Time gunplay used throughout the series.[1]

Outer door to the back entrance of the launderette

The front desk in the reception area 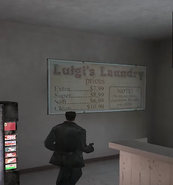 Prices for laundry services
Add a photo to this gallery

Retrieved from "https://maxpayne.fandom.com/wiki/Luigi%27s_Laundry?oldid=23164"
Community content is available under CC-BY-SA unless otherwise noted.