Love Hurts is the seventh chapter of Part III in Max Payne 2.

Max and Mona drive to Alfred Woden's manor, and once they arrive and make it to the top of the perimeter wall, the couple sees Squeaky Cleaning Company vans and Cleaner commandos patrolling the manor's driveway and building. As Max attempts to climb down the wall in order to get inside the premises, the commandos notice him and begin to open fire on him and Mona. The two separate and Max goes through the front door while Mona heads inside through a nearby door. When Payne gets inside, the ceiling above collapses from an explosion and several Cleaners rush into the room.

Taking the Cleaners down Max heads deeper into the manor, reaching a small courtyard where he sees Mona on a walkway above him. Max tells her to take the second floor while he takes the first, and before he has a chance to do anything else the shutters over the doors and windows in the courtyard raise. Cleaners rush into the courtyard but Max is able to take them all down, and he then makes his way back into the building the way the Cleaners came, going through a library as well as a large dining hall while taking out many more Cleaners.

Max heads upstairs and into a nearby security control room and while in there he sees a security monitor which shows several rooms throughout the manor. The first shows Vladimir Lem talking to one of Alfred Woden's bodyguards, Clay, who tells Lem that Woden and "the gold" are in the panic room of the manor and that they need to get in there. Lem tells Clay that there is no rush, and soon after another guard shows up to tell Vlad that some explosives have been set. Max then sees a video of Woden sitting in his panic room, and another video of Mona sneaking up on a turncoat bodyguard and shooting him down.

The couple eventually meet up in another courtyard in front of the door that leads to another part of the manor, and when Max realizes that the door is locked Mona triggers a secret way to open the door; Max then realizes that Mona is working for Woden. After heading inside Max calls out to Mona to stop and wait, but she sneaks up behind him and knocks him out with her gun. Max, on his knees and holding his head, is instructed by Mona to throw away his guns, and while looking at a security camera she tells the person watching that she can't kill Max. Vladimir Lem suddenly comes up behind Mona and shoots her in the back, and when she falls into Payne's arms Lem says that he was hoping the couple would have killed one another. Before Vlad can do anything else, Alfred Woden comes out of his panic room and tells Vlad to stop; Woden apologizes to Max and calls for an end to the killing.

On the PS2/Xbox version, this chapter is divided up into two parts: Chapter Seven: Love Hurts and Chapter Seven Continued... 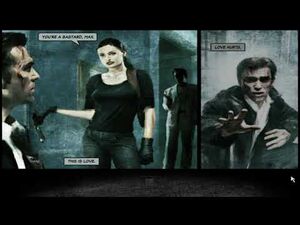