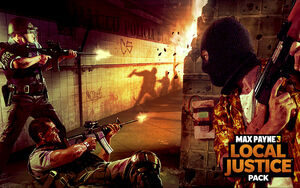 Local Justice was the first out of five DLCs to launch for Max Payne 3.

This DLC was set to launch on July 3rd, 2012 on Xbox LIVE and PlayStation Store, while the PC users would have to wait until August 9th, 2012 for the map pack to arrive.

Local Justice is a map pack.

Since the Local Justice map pack was originally announced to release in June, Rockstar Games made it available for a discounted price during its launch week as a show of appreciation for the patience. During the launch week, the map pack was available for 480 Microsoft Points on Xbox LIVE and $5.99 on PlayStation Store and PC. After a while this map pack has dropped down its original price and is currently $3.99/£2.99 on Xbox LIVE, PlayStation Store and PC. 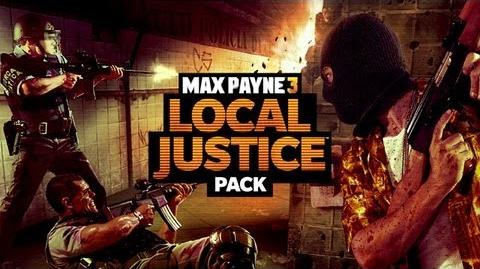 The final and official artwork theme for Local Justice DLC

Match on top of the Imperial Palace

The corridors of the 55th Battalion HQ

A battle between SPP and Comando Sombra

Players battling others between different levels in Departure Lounge

The SPP defends the HQ against Comando Sombra

Map of the Imperial Palace

Map of the Departure Lounge

Map of the 55th Battalion HQ

A good throw and an achievement/trophy can be earned

The M4 Assault Rifle
Add a photo to this gallery

Get 2 kills in a single Shootdodge in the Departure Lounge

Kill 4 players within 3 seconds in the Imperial Palace

Long Arm of the Law

Level up your M4 all the way to level 10

Retrieved from "https://maxpayne.fandom.com/wiki/Local_Justice?oldid=25367"
Community content is available under CC-BY-SA unless otherwise noted.