"We come to you now live from the crime scene."
―Max Payne calls from Roscoe Bank

Live from the Crime Scene is the second chapter of Part I in Max Payne.

He arrived at an abandoned station during the 40's as a passage to where the heist is going to happen. Max traverse through the abandoned station to find more mobsters and eliminate who stand in his way. He eavesdrop mobsters mentioning Lupino's insanity which indicates the mobsters belong to the Punchinellos and Jack Lupino.

On his way, he heard and felt an explosion happening and found out that the mobsters blew a hole in the wall side to reach the Roscoe Bank vault. He also found a door that is rigged with explosives which also cover the mobsters escape. Max soon kill off all the Punchinellos in the bank and reply to Bravura who is dealing with the robbery. Max check the other vaults to realize that they are stealing Aesir's, a successfully pharmaceutical corporation, bonds before taking the detonator for the door.

After exploding the door, he meet Alex who is behind a gate and explain the heist by Lupino to Alex which he figure something up. However, he is killed by an unknown assailant before revealing to Max. With his friend's death, he soon kill his way out of the station. His friend kept him sane for 3 years after his family's death and Max doesn't know how he felt. He knows Alex got killed due to finding something that implicates Lupino.

On the PS2/Xbox version, this chapter is divided into three sub-chapters: One Way or the Other, Live from the Crime Scene and Stepping on Toes.

Live From the Crime Scene

Complete 'Part I Chapter 2: Live From The Crime Scene' on any difficulty

A Killer Rat getting shot 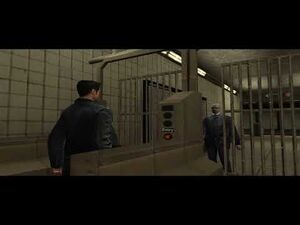