Fear That Gives Men Wings
Let the Gun Do the Talking is the fifth chapter of Part I in Max Payne.

After leaving Lupino's Hotel, Max Payne makes his way to Jack Lupino's tenements to continue his search, but as he reaches the street corner closest to Lupino's apartment, he sees Vladimir Lem driving away in his car as a car blows up. As Lem makes his getaway, and inadvertently causes a tanker truck to crash and explode, a bomb goes off on Lupino's floor of his apartment building. More bombs in the tenements explode with the police coming to the scene and possible for bombs planted. Max tries to enter the tenements buildings but the door is locked, he soon go to the backdoor instead.

On the way down the street, he saw a newspaper stand that talks about Alex's murder which disturbed Max along with the police sirens. He reach the basement of the tenements where Max kill the 3 guards. After that he move through the underground to find more Valkyr junkies. Suddenly, an explosion occurred, destroying the path behind him with the fire consuming it. Max find its only way out is locked by a door, using the nearby explosives, he ignite the explosives to destroy the door. He soon fight off more mobsters before reaching ground level.

As he reach ground floor, he saw a payphone ringing and thought to be a junkie. However, it revealed to be a mysterious messenger warning Max of the danger. After the call, the police arrive to catch Max Payne. Max went to the pawn shop's counter to find multiple weapons, a key to the stairwell and letter from Vinnie. It is revealed that the Punchinellos left the Russians with little weapons and Vinnie thinking wouldn't dare to attack which it did. The police arrive and Max hurried to upstairs.

He fought more Punchinellos on the way until he found the upstairs is blocked by explosion debris and had to move to another way. He enter a room filled with mobsters and kill them, he soon exit to an outside stairwell.

On the PS2/Xbox version, this chapter is divided into three sub-chapters: The Man Riding Shotgun, Something More Sinister, and Let the Gun Do the Talking.

Complete 'Part I Chapter 5: Let The Gun Do The Talking' on any difficulty 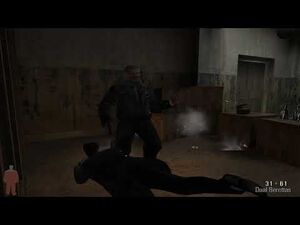 Retrieved from "https://maxpayne.fandom.com/wiki/Let_the_Gun_Do_the_Talking?oldid=29689"
Community content is available under CC-BY-SA unless otherwise noted.