The Kalashnikov, also known as the AK-47, is a standard assault rifle, fast and powerful, with little drawbacks.

Boasting a high rate of fire, high damage, good accuracy and an abundance of ammo, there is really no drawback for using it aside from a slight inaccuracy at range. The Kalashnikov is one of the two assault rifles available in Max Payne 2. The Kalashnikov is in many ways identical to the M4 Carbine, boasting identical firepower, fire rate, and ammo capacity. However, the M4 is slightly superior since it has perfect accuracy which the Kalashnikov lacks. 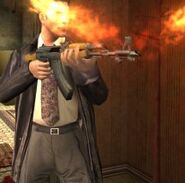