"Bull....shit!"
―Bravura's last words before passing out after being gunned down 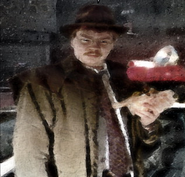