Jack Lupino is the tertiary antagonist of the Max Payne game and main antagonist in Part 1, The American Dream. He is the underboss of the notorious Punchinello Mafia and responsible for the distribution of Valkyr sales to the criminal world under the boss' orders.

Max initially suspect Lupino for the frame up and murder of his friend, Alex. However, this is proven untrue as mobsters conversation, Vinnie's letter and many occult items show that Lupino went crazy especially since he is a Valkyr addict himself.

He was killed by Max, who wanted to avenge his friend's death.

His name and affiliation imply that he is of Italian heritage. At some point, Jack Lupino joined the crime family of Angelo Punchinello and became an underboss of the family and Angelo Punchinello's right-hand man. Lupino owned both a hotel and nightclub called RagnaRock and put the Finito brothers in charge of the hotel's operations.

He also met Max Payne once, though it is unknown what happened during that meeting. Though it's not shown in the game, the film based on the first game, clearly shows how they met.

Shootout in Ragna Rock and death[]

When confronted by Max Payne, Lupino wields a Sawed-Off Shotgun and Molotov Cocktails, chasing after Max Payne alongside his two bodyguards. His shotgun does heavy damage and can kill Max with a single direct hit, but must be reloaded frequently. Lupino himself is extremely durable, which Max attributes to him being heavily dosed with Valkyr. It takes about 64 rounds of Beretta 9mm pistol fire to bring him down, though headshots reduce the amount of shots required to kill him, and he can still be stunlocked by full-auto fire. Lupino often will dodge-roll to attempt to evade Max's gunfire.

Lupino is accompanied by two bodyguards in black trenchcoats, one of which is equipped with a sawed-off shotgun and the other with an Ingram machine pistol. Additionally, Max will have to fight a large number of bodyguards in Lupino's arena before Lupino will show himself.

Lupino also wields an Uzi submachine gun in the cutscene before the fight, but in-game uses a sawed-off shotgun instead. He also owns a wide variety of books about demons and devilish myths which he uses for his rituals and ceremonies.

Lupino is surrounded by cultists wielding shotguns, Molotov Cocktails, and Ingram. Keep moving and keep firing with a cool head. Despite his somewhat intimidating demeanor, Lupino himself is probably the easiest boss in the game; he uses a sawed-off shotgun and, after he fires his first two shots, he is completely open to any sort of attack. It is possible to even bludgeon him to death easily with a baseball bat. Every time he is hit while he is reloading, he is forced to start his reloading animation over again. To sum it up, kill his henchmen, dodge his first two shots, then finish him off with the weapon of choice. 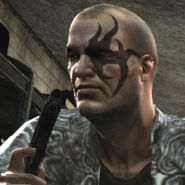