"Well it's drive or shoot, sister. And right now, I reckon I'll be better at the shooting."
―Max to Giovanna

It's Drive or Shoot, Sister is the tenth chapter in Max Payne 3.

The chapter starts with Giovanna talking to Raul Passos in the public telephone while Max is looking around for gangs and paramilitary while taking off his shirt as it is ruined from sliding on the roof in the previous chapter. After the phone conversation, Giovanna tells Max that the help is coming but in some time. Giovanna notices some cop looking at her. Max's initial idea of being safer in the crowded streets is no longer viable. Giovanna and Max start find hiding spots until help arrives and they end up in the bus junkyard.

Giovanna throws up a few times while they reach the place. Max is informed by Giovanna that she is pregnant with Passos' child. Being unable to hide from the gangs, Max starts to attack the hunting gang in the junkyard as the player regains control. After clearing the area, a cutscene shows two people on the rooftops with snipers. Giovanna starts to go crazy and gets anxious, stating that "this is insanity". Max tries to calm Giovanna down by telling her that Passos will be here there in a minute but she refuses saying there isn't going to be a "minute" if she keeps moving from one cover to another. Once the game resumes, Max has to kill the snipers in order to proceed into the next phase. Giovanna's comical and scared wandering around distracts the snipers time to time which gives Max a small window to take care of them. Since the building where sniper sitting is too far away, Max can get further away/closer and take them out with regular guns. After the snipers are dealt with, they move to the next area where a gas station is located. They get ambushed and Giovanna hides from the paramilitary officers as Max (player's control) immediately gun downs the Crachá Preto members. Max then returns to Giovanna as she helps Max by lowering lower a ladder. The two proceed but get ambushed once again by the Craćhá Preto. Max tells Giovanna to get down to the ground and then Max jumps to the chain (player's control) and hangs from it, killing nine members around the area while the chain was pulling Max to the ground. Giovanna returns to check up on Max on how to find a way down. Max (assuming control from the player) goes around the garage door via a car wash bay but manages to have a fire fight with the CP. Giovanna is seen chased by two Crachá Preto members who attempt to kill her but both upper platforms are beginning to collapse. Max attempts to save Giovanna by shooting the platform the Crachá Preto members are standing on, who then fall to their deaths. This triggers more members to arrive but all get shot by Max. Giovanna presses a switch to lower the stairs for Max to get up through. The two proceed but Giovanna signals Max that there's "someone down there" who are shortly revealed to be the Crachá preto. Max proceeds downstairs and kills the hiding members. Shortly after, Giovanna comes downstairs yelling "why are you doing this?" and/or stating that "this is all fucked up!" unknowingly. While Max was ignoring her, the two go outside to find a nearby window to break in. While Max was opening the window which he cannot fit in, Giovanna says to Max that he is the one breaking in but Max proclaims that Giovanna is the one breaking in. Giovanna then goes through the window and opens a door for Max but as soon as he gets in, Giovanna tells Max to be quiet which Max agrees to. While Giovanna automatically hides in the kitchen, Max (within a players control) storms in the office and kills all members in the area. Giovanna then goes to the door as Max opens it via a switch, a Crachá Preto member kicks the door down and is about to kill Giovanna. Max rushes to Giovanna's aid and shoots the CP member while entering Bullet Time. After the office shootout, the duo then head outside as Max asks Giovanna some questions, involving what Giovanna has done (in the context of whether she has shot anyone before or not). While Max gets all of his replies as a no from Giovanna, the two get in an empty bus Max orders Giovanna that "it's drive or shoot, sister". As Giovanna, having no idea how to drive the bus, speedily gets away from the bus station, Max defends the bus by killing many Crachá Preto members as Giovanna often crashes the bus into the environment. Giovanna crashes the bus in the favela thus knocking both Giovanna and Max unconscious.

A few moments later, as the two regain conscience, Max tells Giovanna to get on top of the building and signal Passos to wait for Max come on top. While Max was surrounded in the bus, he grabs the MD-97 LC and uses this to kill a small army of the Crachá Preto members who were hunting him down. After Max demolished the small army of paramilitary, with no one left to tell the tale, Passos and Giovanna leaves Max behind forcing him to wait until he was able to leave the area. A few minutes later Wilson Da Silva comes in the area and pick Max up. Both have a conversation on their way to the car park until Wilson Da Silva asks Max about the events in Panama. Which then results of Max having a flashback of the events of his second day on the job. 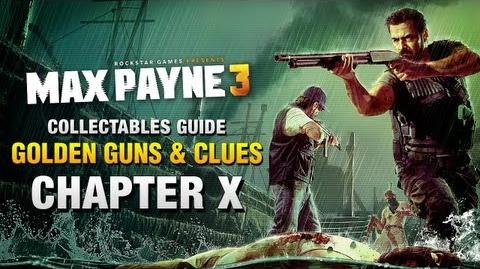 The Only Choice Given

Get 8 Kills While Dangling From A Chain [FREE AIM]

Trouble Had Come To Me

Clear Everyone On The Bus Ride

Retrieved from "https://maxpayne.fandom.com/wiki/It%27s_Drive_or_Shoot,_Sister?oldid=29624"
Community content is available under CC-BY-SA unless otherwise noted.