"Later, I kind of in the middle of something."
―Max Payne talking to Mona Sax

In the Middle of Something is the second chapter of Part II in Max Payne 2.

Max, thinking of Vladimir Lem's 'trojan horse' idea, gets out of the van, but not before overhearing some Cleaners discussing "evidence" that was taken to the top floor. As a Cleaner named Andrews opens the back door of the van Max is in, Max quickly overtakes him and kills him. Now having a clue to follow up on, Max heads deeper into the building in order to find a way upstairs.

Going through a lobby of the condemned building and taking down some more Cleaners, Mona Sax tells him that she's arrived at the site over their radio, but apparently in the wrong building, so she lets him know that she is moving towards the roof of the building she's in to get a look at the entire site. Seeing many explosive crates scattered around, Max continues through the building but soon cannot go any higher, so he climbs down a floor in an elevator and makes his way outside.

Taking down several Cleaners in the small courtyard and collecting some painkillers and ammo from the nearby guardhouse, Max heads back inside the building by way of another entrance. Continuing through the building and up several flights of stairs, Max makes his way past Cleaners and several obstacles, such as gaping holes in the floor, when he suddenly finds what seems to be the guns and ammo taken from Annie Finn's gun workshop in a corner room on an upper floor. He warns Mona of the arsenal that the Cleaners are packing and moves on, moving upwards through the building while fighting off Cleaner commandos.

When Max finally reaches the top floor, he finds a makeshift living and storage area for the Cleaners, including several of them dressed without disguises or tactical gear. Taking them out, Max begins to explore the area, eventually coming across a room full of bodies that the Cleaners had gathered there, evidence of their killing that they were able to haul away. Realizing all of this evidence was too great to ignore, Max instructs Mona over their radio to call the police. Mona, however, tells Payne that she's a wanted fugitive and condemns him for his suggestion.

On the PS2/Xbox version, this chapter is divided into two parts: Chapter Two: In the Middle of Something and Chapter Two Continued... 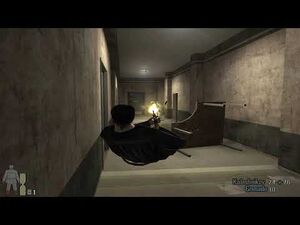