"In the land of the blind the one-eyed man is king."
―Max describing Woden's position

In the Land of the Blind is the fifth chapter of Part III in Max Payne.

Max arrives at the Asgard Building and is greeted by Alfred Woden, who gives Max the name of his enemy: Nicole Horne, and reveals she is head of the Aesir Corporation. After Max learns of this information in a meeting with the Inner Circle, they reveal that they will clear all of the charges made against him in exchange for killing Horne. At that moment, the Killer Suits enter the room and begin killing off the Inner Circle members and Max jumps out the window.

Max then re-enters the building via the cellar, kills several mercenaries before finding a security monitor, and sees that Alfred Woden had survived the massacre. A few bullets later, Max finds Woden's office and a tape with an extortion note attached to it, suggesting Horne was blackmailing the Inner Circle into silence. Woden had left behind the blueprints of the Aesir Headquarters building and its elevator system, marking critical areas for Max. He then heads to the lower levels of the building, killing any remaining mercenaries and Killer Suits who try to stop him, and goes into the basement levels of the building.

On the PS2 version, this chapter is divided into three sub-chapters: In the Land of the Blind, Providing a Service and A Sci-Fi Fortress.

Complete 'Part III Chapter 5: In The Land Of The Blind' on any difficulty 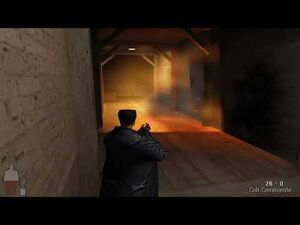