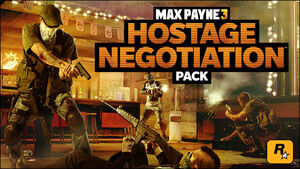 Hostage Negotiation is the third out of five DLC's to launch for Max Payne 3.

This DLC was launched on October 30th, 2012 on Xbox LIVE, PlayStation Network and PC.

The Hostage Negotiation Map Pack is a DLC for Max Payne 3 which delivers four new multiplayer maps into the fold - all specially designed for online action - along with a range of new Items and weapons plus the Filhos De Ogum avatar faction.

The new Filhos De Ogum faction battles it out against the U.F.E. in the all-new Favela Heights map.

Slow down your opponents' reload time with the new Intimidation Mask item.

Protect yourself from explosive damage with the new Bomb Suit.

Arm bandages and face tattoos are just a few of the accessories that you can equip on your Filhos De Ogum avatar.

Each faction's customized Heavy Helmet will reduce all damage taken to the head by 75%.

Gear up if you plan to take control of the O Palácio Strip Club located in the center of the favela.

Map of the Favela Heights

The map of Club Moderno

The map of Galatians' Stadium

Perform a 720 spin while prone in the Nightclub

Retrieved from "https://maxpayne.fandom.com/wiki/Hostage_Negotiation?oldid=19155"
Community content is available under CC-BY-SA unless otherwise noted.